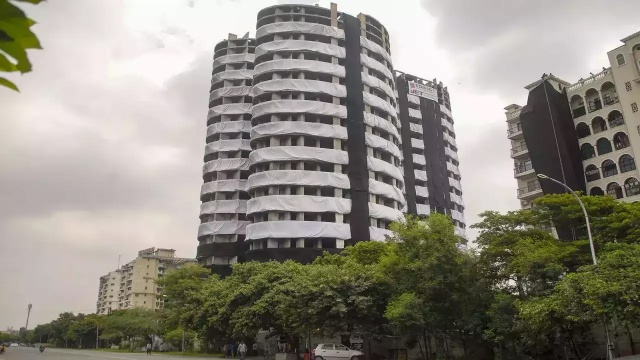 In India, two illegally built high rise buildings, named Havan, around 100m high, were blown up at the end of August, 2022

In about nine seconds, the Havan twin towers collapsed. The preparation had taken months. It was a particular challenge as the towers were in a densely built up area. From a political point of view, the demolition is a stage victory against what is seen as the widespread corruption in the real estate sector.

The high rise Havan buildings collapsed, creating a huge cloud of dust that completely enveloped many other high rise residential buildings in the neighbourhood. The Indian Supreme Court ordered the destruction a year ago as the private contractor had violated building regulations for the residential buildings. The court also ordered action against agency officials who accepted the building plans following a 12 year legal battle. Buyers of the apartments will have to be compensated. A total of almost 1,000 apartments were housed in the 32 and 29 storey buildings. Indian media has referred to the two skyscrapers as ‘Twin Towers’.

The controlled demolition took place in the densely populated city of Noida near the capital, New Delhi. 3,700kg of explosives were used to bring down first the basement and then the upper floors. The demolition work was carried out by the Mumbai based demolition company Edifice Engineering in cooperation with the South African demolition specialist Jet Demolitions. Utkarsh Mehta and Jigar Chheda, both Edifice partners and Mayur Mehta, the project manager for Edifice, supervised the project together with specialists from Jet Demolition. Mohan Ramanathan, known as ‘the demolition man of India’, also attended the Havan implosion. Ramanathan is the ‘guru’ of Utkarsh Mehta and Jigar Chheda. District Magistrate Suhas L Yathiraj also attended the Havan implosion.

It was expected that the explosion would produce small tremors that would be felt up to 30m away. A government official said after the blast it went ‘as planned’. Residential demolition is a rarity in India. Builders often leave projects half-finished after breaking the law. India has experienced a construction boom over the past 20 years, which has also led to what the country considers to be a network of corruption among politicians, officials and building contractors.

Several thousand residents of surrounding buildings were asked to leave their homes well in time before the implosion. Among other things, they we instructed that they should also take down paintings and leave windows closed. Adjacent buildings were previously covered with a special fabric to protect them from dust. Stray dogs and cows were also taken away before the explosion, local media reported. During the blast, there was a temporary ban on flying in the area, and traffic was also restricted. In total, around 88,000t of rubble was created, which will be removed over the course of three months. The towers and their demolition had already been an attraction for many onlookers days before with the implosion being one of the largest in India so far.

Utkarsh Mehta from Edifice Engineering stated that in terms of height, volume and steel used, the blast is one of the five largest in the world. The blast cost the equivalent of around €2.25M.