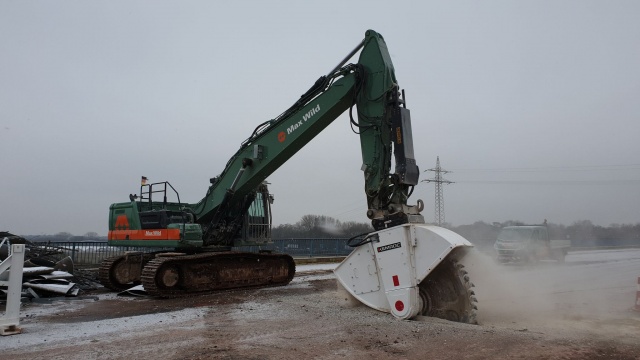 Rock saws are versatile excavator attachments that are suitable for a wide variety of applications including, but not limited, to demolition, rock excavation, trenching and quarrying. Originated in Australia - the world’s mining capital - rock saws are now manufactured in different corners of the globe. PDi’s Andrei Bushmarin has the latest news from this growing industry.

Australia based Echidna Technologies started out in 1990 as a supplier of high tech instrumentation solutions and later robotic installations. Then in 2006, Echidna entered the excavator attachment market and used its vast engineering expertise to increase the safety and productivity of rock saws. In 2009, the Australian company moved the bulk of its production to the Czech Republic to take advantage of the high quality manufacturing there as well as the size and nature of the European market, which is largely focused on demolition and recycling. In 2018, Echidna USA was established to serve the North American market, manufacturing locally. Echidna now manufactures a wide range of earthmoving, cutting and grinding attachments and also supplies customised solutions for specialised or dangerous jobs.

Echidna’s flagship model, the ‘OmniCut’ saw, was recently given a tough workout on some of the hardest concrete in the USA, where its capabilities were exploited at two different projects at the port of New Orleans. First, the attachment was employed in the demolition of an old warehouse to make way for container storage. Mounted on a 20t Kobelco excavator, the Echidna O5HP OmniCut saw was used to make cuts 250mm high and 380mm thick into concrete heavily reinforced with multiple layers of 25mm-32mm rebar on 300mm centres. Being 30 to 40 years old, the concrete is extremely hard and challenging for any conventional rock saw. The Echidna OmniCut, however, passed the test with flying colours by carving through it at up to 10 times the speed of a regular diamond blade. Each cut took an incredible 2min and 15sec. The same saw was then mounted on a John Deere 333G compact track loader to deepen the umbilical cord trenches for the new larger cranes being installed at the port. The wide kerf, clean cut provided by the OmniCut blade is ideal for microtrenching applications such as this. OmniCut rock saws have a relatively low blade speed for safety while ensuring high cutting speed. The long lasting OmniCut teeth can be replaced on site.

Kemroc shines on a major bridge renovation project in Germany

Headquartered in Berkheim, Upper Swabia, Max Wild GmbH is a large demolition firm with several depots in southern Germany. With a vast fleet of modern demolition equipment, the company boasts a strong track record in dismantling residential buildings, industrial complexes and bridges. Recently the German contractor was involved in one of the biggest demolition projects in its history when the old Saar Bridge at the Saarlouis autobahn junction was earmarked for replacement with a new one with higher traffic capacity. The specifier, the Western subsidiary of Autobahn GmbH, awarded the contract for the overall project to the consortium Schnorpfeil / SHE, who sub contracted the demolition part to Max Wild GmbH. The plan called for breaking the old bridge down into sections that could be placed on pontoons and floated away to a crushing facility on the riverbank. The first stage involved the removal of all structurally non-essential elements from the bridge deck. These included the cantilever arms and the concrete slab between the hollow boxes of the autobahn lanes. Under normal circumstances, a concrete saw would have been enough for this task, but due to the extremely angled nature of the construction, the saw would have to be repositioned many times, which is a very time consuming option.

Following discussions between site manager Max Fus and Kemroc’s application consultant Marco Schön, it was decided to make the longitudinal cuts along the bridge axis with a concrete saw and to use a ‘DMW 220’ drum cutter (220kW rated power, 500mm to 1,000mm cutting depth and 130mm cutting width) fitted on a 40t excavator for crosscuts. Featuring two lateral hydraulic motors, the DMW cutters provide high production rates. The DMW 220 encountered heavy resistance on the bridge panel that crossed the Saar River. The concrete was cut into segments, each weighing between 6t and 10t. Each segment was lifted out with a crane and transported to the crushing plant on the riverbank. Max Fus commented on the drum cutter’s performances: “The bridge was tensioned in a transverse direction and was therefore structurally difficult to cut. Nevertheless, I was surprised to see the same performances on both pre-stressed and non-stressed concretes. Using a combination of diamond saw and drum cutter, we made quick progress and achieved a cutting speed of some ten linear meters per hour.” He added, “Even with a relatively high wear rate of the tungsten carbide tipped picks, this method proved to be the most economical solution due to high production rates.”

Founded in 1985 in Hagerstown, Maryland, Antraquip is a medium size family owned company that focuses on manufacturing rotary drum cutters and diamond and carbide saw attachments. To complement its core business, the US manufacturer also supplies soil mixers, patch planers and tunnel support systems. Antraquip’s carbide rock saws are suitable for soft to medium hard rock and concrete cutting applications with a minimum width of some 50mm. Its diamond rock saws, also known as the ‘AQD’ series, are capable of cutting the hardest rock including granite and basalt as well as reinforced concrete.