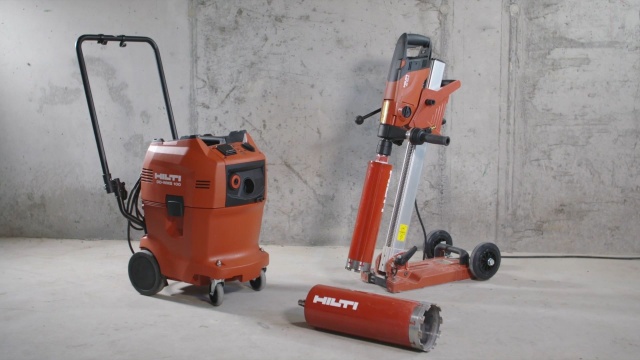 When the Demcon 2020 tradeshow was cancelled in September due to the spread of the coronavirus, the organisers of the show instead created the digital platform ‘Demcon Virtual Road Trip 2020’. During September and October, 14 suppliers were visited and the results premiered online from the end of October to mid-November. All the films are now available for viewing at www.demcon.se until September 2021.

The global exhibition industry has had to rethink and adjust, with all industry shows, bar bauma China, having been cancelled and moved forward to either 2021 or 2022, with the usual ‘physical’ trade shows this year being moved to a digital platform. The decisions to do this are justified as the second wave of the pandemic is now raging across Europe, whilst in North and South America, one can hardly talk about a second wave yet. Some trade fairs that should have been held this year have been moved to 2021 and again to 2022. Swedish show Nordbygg is an example of this. The Italian trade fair SaMoTer is now to be held in 2021, likewise Ecomondo. Intermat in Paris is still scheduled for April 2021 depending on the coronavirus. World of Concrete has been moved from January to June 2021, but is probably in peril even with the new date.

When the question arose about changing show dates many trade fair organisers and equipment manufacturers began to plan ‘virtually’. Seminars began to be held online to provide information on developments. An example of this was the Demcon trade fair for the Nordic demolition industry. Demcon should have been held at Infracity north of Stockholm 24 to 25 September this year. In June, the decision was made to move the fair to 9 to 10 September 2021 and as an alternative, Demcon Virtual Road Trip was created. 14 companies seized on the idea that a film crew from S.C.O.P. AB would travel to their site and create company focused films. The participating companies were Hilti, Milwaukee, Rototilt, Husqvarna Construction Products, HTC Floorsystems, Thovo, SDC - Swedish Diamondtool Consulting, Drome, Sila, AGP, Cardi, Starmix, Andersen Contractor and Conjet.

When the films were produced and approved, they were uploaded according to a special schedule on the demcon.se site with the first airing being on 21 October. They are still available on there and Demcon's channel on Youtube where they will be shown until the ‘physical fair’ is held in 2021. By the 20 November, when all the participating films had premiered, 1,900 different IP addresses had watched the films. This is of course a figure that is constantly increasing as the virtual road trip is continuously being promoted via the industry magazines Professional Demolition, PDi Magazine and Svensk Rental Tidning, as well as via a number of different social media portals.

The first company visited was the manufacturer Hilti which presented its exoskeleton ‘EXO 01’ that facilitates and relieves the operator when working above shoulder height. Hilti also showed its ‘connected’ products that make work smarter as well as a new water management system for wet drilling. The latter system is ‘closed’ which means that it does not have access to running water. The water binds the dust, sucks up the sludge in the wet suction and releases the purified water, hence cooling the drill. Hilti also showed the new ‘DRS’, which is a dust reduction system that can be applied to most types of tools and machines in Hilti's range and connected to its vacuum cleaner. The difference with and without DRS is striking. Also shown was the latest in vibration technology called ‘Hilti AVR’ and ‘ATR’ (Active Torque Control) and the new ‘TE70 ATC skewer’ for heavy duty demolition. The high frequency wall saw ‘DST 20-CA’, which was launched at bauma last year was also featured along with the company’s industry adapted health and safety educational programmes.

Rototilt featured its award winning fully automatic quick release system, ‘Rototilt QuickChange’. QuickChange possesses a number of advantages such as that it is fast, safe, efficient and environmentally friendly, but above all that, the demolition operator can quickly change hydraulic tools without having to leave the cabin of the machine.

Husqvarna took the opportunity to present its ‘Safety Tour’, which despite the coronavirus, travels Sweden providing information on Husqvarna's various safety solutions that minimise the risk of injury due to incorrect handling. In particular, features were highlighted that increase safety when using the manufacturer's power cutters. New diamond tools were also shown that clearly indicate when they are used up as well as ‘SmartGuard’ and ‘SmartBlade’, among others. Also highlighted was the new service centre in Stockholm. The new drilling machine DM430, which replaces DM 340, was shown, being a drilling machine that is easier to use, maintain and service, with the company’s ‘Prime series’ being updated from K6500 to K7000. It was also announced that Husqvarna is launching new tools for its ‘Hyper Trowels’ line and that it will release eight new models of the ‘PG grinding’ series in November.

The virtual road trip also visited HTC Floorsystems in Söderköping to discuss the value of training at the HTC Academy. HTC Academy covers sanding wood and concrete floors as well as polishing. The most effective way to learn is of course to train on site at the training centre, but due to these trying times, web based training is now provided.

Thovo AB in Särö is a supplier in Sweden with a focus on smart and efficient unloading equipment that consciously thinks sustainably. The product focus is electric construction machines, primarily for indoor use, but today the range also includes battery powered skid steer loaders.

Tyrolit was visited in Hisings Backa north of Gothenburg. The company is a major manufacturer of professional drilling and demolition equipment as well as various types of diamond tools and has been operating since the 1960s. The company's sales manager for the Nordic region, Walter Sund, introduces in the film the latest products, such as high frequency powered wall saws, ring cutters, drilling systems and wire saws, among other things.

From the Gothenburg area, the road trip went to Nora to visit the Swedish company’s head office and manufacturing centre in Nora as well as its sales office and service workshop in Stockholm. ISDC - Swedish Diamondtool Consulting – acts as dealers for a wide range such as diamond tools from Arix, drilling equipment from Pentruder, drilling motors from Weka and is the licensed manufacturer of Savi floor saws and more. It also undertakes production of rock drilling diamond tools and a wide range of its own diamond tools.

Drome a supplier with ambition

Drome has its head office, warehouse and service workshop in Dalstorp, as well as a sales office, warehouse and service and repair workshop in Stockholm. Drome made a strong impression during the virtual road trip with the company producing separate films for all the brands it represents.  These included its own diamond tools under the Drome brand,  Silas air cleaners, AGP Power Tools, Cardi drills from Italy and the German Starmix vacuum cleaners.

Andersen Contractor is a dealer that has been active in the Swedish market since the late 1980s. Over the years, it has been involved in introducing a number of major brands in demolition, recycling, scrapping, waste management and much more. The company has been the dealer for Trevi Benne demolition and recycling tools in Sweden for many years, as well as the versatile mobile shredders and crushers from Arjes.

Last but not least, Demcon Virtual Road Trip visited the manufacturer Conjet which has been developing hydrodemolition technology since the 1980s, including a certified method for removing damaged concrete with high pressure water. The Conjet film focuses on the different applications that are offered for effective removal of damaged concrete without creating micro cracks in the concrete. Conjet's equipment provides a clean and perfect surface for adhering new concrete. Conjet is also launching ‘Automated Concrete Removal’, which is a broader concept than just hydrodemolition or water jetting.

The news films will remain on the internet until September 2021
Demcon's virtual trade fair with all the news films will remain on the Demcon website (www.demcon.se) at least until September next year so that as many as possible will have as many opportunities as possible to watch. Unfortunately for countries outside Scandinavia, all presentations are in Swedish except the one from Conjet which is in English.