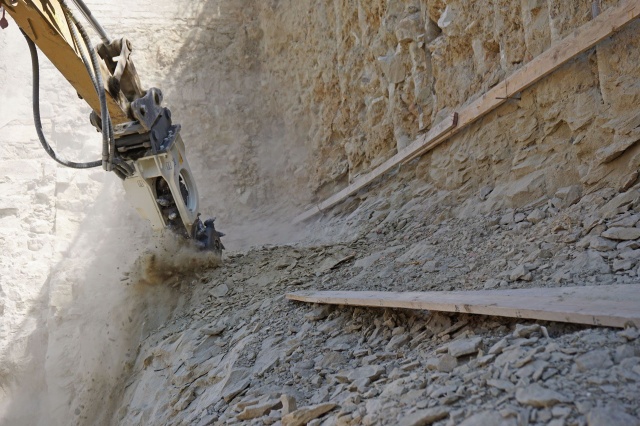 Costruzioni Alfredo La Posta, based in Sora, Italy, successfully used Simex’s TFC 400 cutter head for continuous cutting at a construction site located in Venarotta, in the province of Ascoli Piceno.

The company, which has been operating for more than 30 years in the construction and renovation sector, was commissioned to consolidate a rock face and create a new sewer line below it. The rock face was mainly composed of a compact and abrasive rock with silica veins inside it. The TFC 400 provided high levels of performance and, to the great satisfaction of the operator, after 50h of work the teeth still showed no signs of wear.

The work itself was twofold: on the one hand it consisted of the excavation of a trench approximately 1.6m wide by 1.2m deep for the subsequent laying of sewers; secondly, milling the vertical rock wall for consolidation purposes (micro support poles had already been positioned). The TFC 400 drum cutter thus showed all its versatility with the operator reportedly being ‘delighted’ with it performance. “With this cutter head, we have solved many problems,” said Daniele Frate, from Alfredo La Posta.

“It was impossible to work with the hydraulic hammer as the tip got stuck in the rock. We also tried with a small drum cutter but the work was irrelevant, too much time was lost. The Simex TFC 400, actually, works really well. In one day, we extracted two and a half trucks of material.” The hourly daily production has been recorded as up to 10m³/h, depending on the milling point, achieving the goals the operator and the company set to achieve.