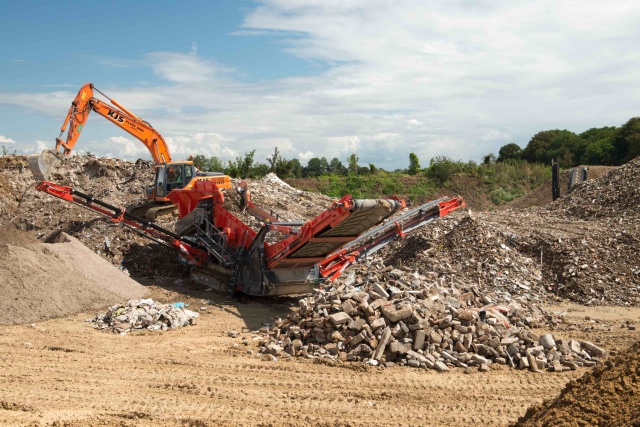 Sandvik Construction attended Demolition Expo 2015 in the UK, held in conjunction with the National Federation of Demolition Contractors at J. Mould’s site near Reading.

Sandvik displayed a selection of its mobile crushers and screens and highlighted its solutions for companies involved in demolition and recycling.

The new QA451 is the latest incarnation of the original S7 triple-decked Doublescreen launched six years ago. The QA451 improves on the productivity of its predecessors, as well as incorporating many refinements.

With new features, such as the hydraulic raise  and  lower facility and slew on the fourth conveyor, the QA451 is designed to work in tandem with primary, secondary or tertiary crushers.

Sandvik’s new QE341 heavy-duty scalper combines 10 years of experience and customer feedback in the mobile scalper market. A decade on from its first launch, the QE340 has been redesigned to offer a more refined unit, that is more robust and offers increased throughput. The QE341 has been developed with easier setup, operation and maintenance in mind.

The QE341 complements the larger QE440 within the Premium Scalper range. The QE341 also features a crusher-style chassis, and has been designed to be compatible for 2-way or 3-way split configurations along with reversible side conveyors.  The screen box jack up facility, also common with the QE440, allows easier access to the bottom deck for maintenance and screen media changes.

One of the major upgrades is the new electrical control system, which incorporates a number of features to improve the operational effectiveness and safety of the machine. The system has colour-coded numerical push buttons and a visual display unit allowing operators to monitor the process.  Prestart warnings on all plant functions and an auto start / stop facility, together with a three mode selector function; set-up, operation and tracking facility, all ensure that safety, as well as ease of operation, is paramount at all times. The unit is fully radio controlled as standard and has a hydraulically folding tail and side conveyors and a rigid one-piece hopper.

Sandvik also launched the QJ241 compact tracked jaw crusher. It is available with a raise and lower facility to the main conveyor that makes it ideal for recycling applications.

The upgraded model incorporates the characteristics of its predecessor, the QJ240, but now includes many additional features as standard. One of these is the addition of a raise and lower facility on the main conveyor, which can be remotely operated whilst the machine is in operation. The main conveyor also possesses a tunnel arrangement to reduce catchment points in recycled materials, and has been extended to give an increased discharge height for stockpiling capabilities.

Another new product from Sandvik is the QJ341 tracked jaw crusher. The development of the QJ341 follows the enforcement of the combustion engine exhaust gas legislation in Europe and the US. This has led to the introduction of Stage 3B/Tier 4i engines, and the need for changes to the power pack.

The QJ341 comes with new features that include a load control system for the feeder drive, level sensor fitted to the jaw and speed wheel fitted to the main conveyor. One of the key design changes has seen the main conveyor fitted with a raise and lower facility for increased magnet clearance together with ease of transportation.

Sandvik was also presented with the Best Innovation Award at the show. This was for the dual drive with reverse crush on the QJ341 tracked jaw crusher.  This feature is not found on any other manufacturers’ crusher and recognises the input of our customers into design features.