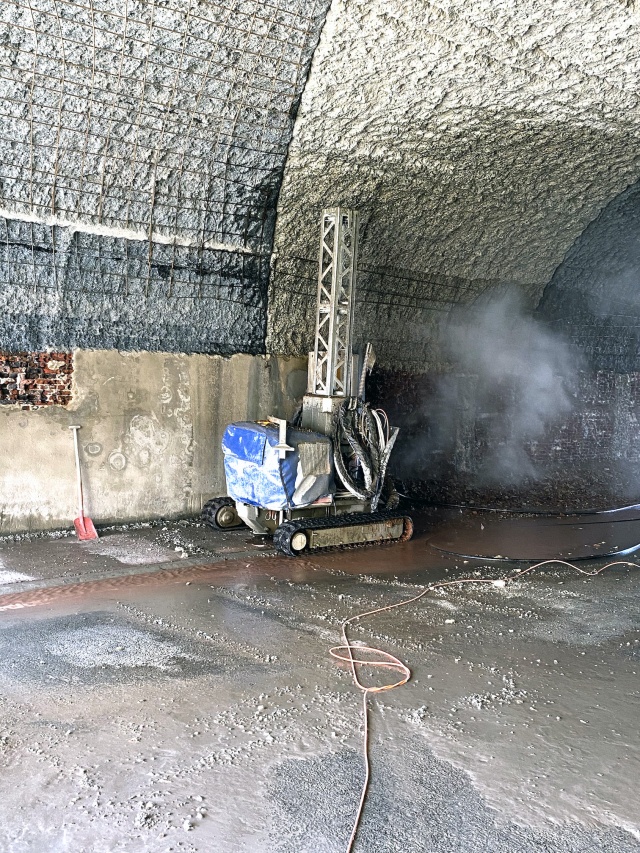 It is no surprise that when a major tunnel repair was required in Belgium, hydrodemolition was the method of choice. The tunnel, which runs under a busy railroad, was becoming a safety hazard because parts of the concrete were falling down into the roadway. The job involved the removal of 6cm to 7cm of concrete from the ceiling and walls of the tunnel. With the growing concern of more concrete falling, this project required an experienced team to operate equipment in cold weather and complete the job as quickly as possible.

Hompert-Renes B.V., a Netherlands based hydrodemolition company, took on the challenge in Belgium and not only removed a total of 42m3 from the ceiling and walls, but completed the project in just two weeks. Using Aquajet technology, Hompert-Renes B.V. was able to prioritise efficiency and go above and beyond the original project requirements.

In 1998, Marchel Hompert and his partner, Francien Renes, started Hompert-Renes B.V., a business that focuses on a variety of services, but primarily on hydrodemolition. Hompert’s interest in the cutting edge technology all started with a simple video clip on the internet. When he first saw hydrodemolition in action, he was intrigued by the opportunities it presented for the industry and wanted to take a further look to research the benefits that come with this method of concrete removal. Hompert was eager to start taking on work in the hydrodemolition field and rented a hydrodemolition robot for a variety of projects.

Fast forward to February 2021 in Elewijtsesteenweg 8 in Zemst, Belgium. Hompert-Renes B.V. had been contracted by Renotec, a Belgium based company that restores and renovates buildings, to complete a critical tunnel project. This tunnel had very old concrete and ran under a busy railroad, which meant it needed to be repaired as soon as possible. Hydrodemolition was the clear solution for this project because of its safety and efficiency benefits when compared to manual methods along with the ability to remove concrete while leaving rebar intact. Although the project seemed straightforward, there was a certain challenge that stood in their way – the weather. With winter weather in full force, with temperatures average -8o in the evening and around zero during the day creating challenges for using a water based solution.

Hompert-Renes B.V. was selected for the job not only for its strong experience with the equipment, but because of their competitive bid. “One of the long term benefits we’ve noticed from owning our own equipment is that we’re able to make our services more affordable,” Hompert said. “Many hydrodemolition companies rent their equipment, which creates additional costs for everyone involved.”

A Problem and a solution

Hompert-Renes B.V. sent a crew of two to take on the tunnel project, one to operate the ‘Aqua Cutter 710 Evo’ and another as a machinist for the Hammelmann HDP 487 high pressure pump. “Shortly after our crew started on the project, we realised we needed to remove more of the tunnel than originally planned because there was more damage and decay than expected,” said Hompert. “The crew ended up working on the entire tunnel with the exception of the floor.”

Hompert’s team ended up removing more than 80% of the tunnel walls and ceiling and worked 7a.m. to 7p.m. each day to complete the project meeting the tight, two week schedule. They used a fire hydrant as the water source for the Aqua Cutter and sealed up the tunnel with tarps and worked inside to combat winter weather. Since the water source was 250m from the tunnel, Hompert’s team used hoses to pump the water where it needed to go. Once the water came through, the high pressure performance of the Aqua Cutter caused the cold water to come out hot. This helped keep the tunnel at a comfortable temperature during working hours and helped minimise freezing.

Although the crew faced plenty of challenges during work hours, the real issues would develop overnight as the water froze. “We knew the water in the hoses would freeze overnight so we emptied them at the end of every day,” Hompert explained. “Even with this process, we needed to thaw the hoses in the mornings with a flame and heater and it took us about 2h-4h/day to remove all the ice from the hoses, which ended up being the hardest part of the project.” Even with all the challenges the project entailed, the team was still able to complete the project in two weeks with just an Aqua Cutter and a pump.