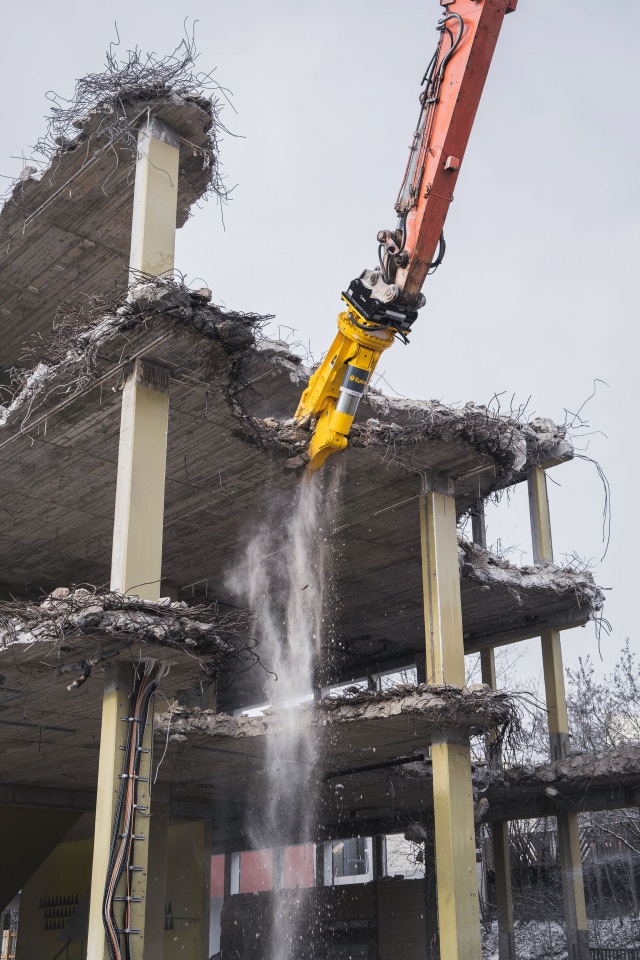 Outstanding performance during the first use of the CC 3700

In Taufkirchen (Vils), Ottl Abbruch & Rückbau GmbH was responsible for selectively dismantling an old school building. Its location in the middle of a residential area required low noise and low vibration work, with the demolition specialist securing the support of its longstanding partner, Epiroc, for this challenge. This saw a new CC 3700 combi cutter supplementing the existing pool of Epiroc attachments used by the company.

Several school buildings from the 1970s had to make room for a new building in the municipality of Taufkirchen in southern Germany. A specialist company was commissioned to undertake the work, Ottl Abbruch & Rückbau GmbH from Alling in the district of Fürstenfeldbruck, which required the dismantling and other associated tasks located in the heart of a residential area. With its mix of experienced and highly qualified employees, as well as a well maintained machinery fleet, Ottl is one of the leading demolition companies in the greater Munich area, and as such, the company relies a reliable, high performance partner that delivers high quality and efficient excavator attachments. “We found this partner in Epiroc,” states Herbert Schiefer, technical manager at Ottl. Both companies have known and valued each other for many years, with the renewed successful cooperation being a highly logical result.

Over a period of nine months, over 27,000m3 of building space had to be demolished and restored in Taufkirchen. Although the school buildings, gymnasiums and assembly halls generally had the same design, they differed in terms of the height and type of roof construction, meaning that suitable specialist equipment was required. The main building consisted of a reinforced concrete skeleton construction with masonry infill. Due to its height of approximately 18m and high concrete quality, a compromise had to be found between excavator and attachment tool. In this case, the decision makers opted for a Hitachi ZX 800 long-front excavator combined with a CC 3700 Epiroc demolition crusher. The latter was used by Ottl for the first time, with the company’s technical manager, Herbert Schiefer, being impressed: “That was exactly the right decision. The concrete had no chance against the CC 3700.”

The former gymnasium, on the other hand, had a flat roof construction as a special feature, which had to be accounted for during the dismantling work. Here, a Hitachi ZX 300 track excavator with a CC 2500 Epiroc combi cutter and a Cat 336 with a CC 3300, were successfully used for the demolition work. Epiroc multi grapples and hydraulic breakers were also used on the large construction site.

Epiroc products are used extensively by the global construction industry, with the demolition work in Taufkirchen demonstrating the attributes of the equipment. Even in the middle of the residential area, the high quality attachments ensured that comparatively low noise and vibration levels were maintained during the work. The CC 3700 demolition cutter, along with the other cutters in the portfolio, impressed with its modular design, easy maintenance, quick replacement of its universal steel cutting and pulverising jaws, as well as delivering high crushing force, short cycle times and high reliability. The devices can be rotated 360o for extensive handling whilst special protective equipment protects the hydraulic cylinder.