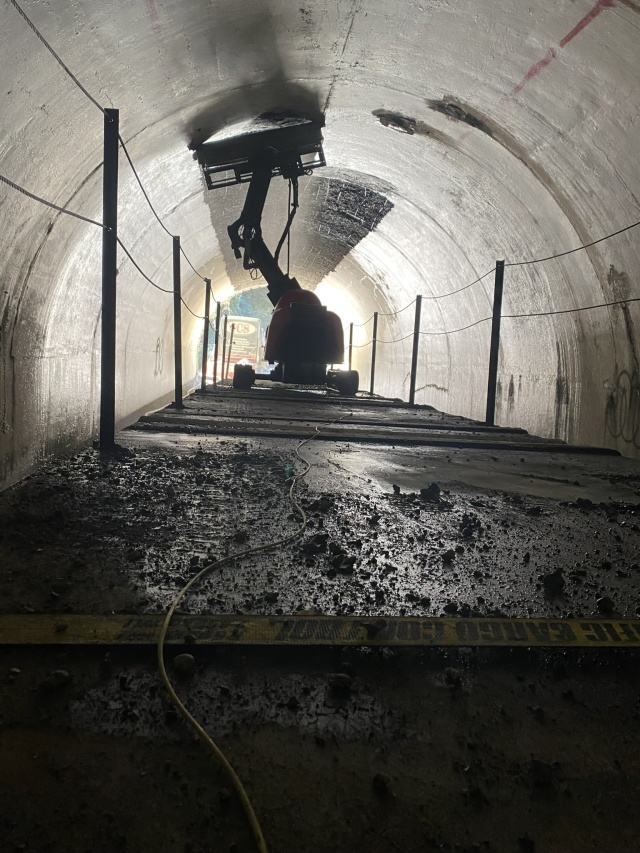 Oregon tunnel restoration sees versatility as the key to success

Tunnels form vital traffic and railroad arteries across the United States, providing the backbone for people and goods to traverse challenging terrain. There are 541 highway tunnels in the nation, with the majority being between 60 to 110 years old, carrying an excess of 15.4M vehicles on an average day.

As tunnels age, asset owners must find creative, efficient solutions for repair and maintenance. Unlike the horizontal surface of a bridge, a tunnel typically has a 360o surface of concrete that must be regularly monitored and restored if the structure is to last. The only alternative – tear down and rebuild – would be extremely expensive and environmentally damaging, if not impossible in many cases. In Portland, Oregon, the Portland Board of Transportation (PBOT) is putting the finishing touches on a project to restore the concrete ceiling and vertical walls of the Northwest Cornell Road Tunnel. With the repaired surface covering a total area of approximately 2,676m2, this project illustrates how innovative equipment can be combined with adaptive project execution to maintain the world’s tunnel assets.

The NW Cornell Road Tunnel consists of two tunnels that were constructed between 1939 and 1941 to support residential development in Northwest Portland. Tunnel 1 is 152.4m long and Tunnel 2 is 76.2m long, with both tunnels containing two lanes, with traffic levels of approximately 10,000 vehicles each. During a routine inspection, a large crack near the crown of Tunnel 1 was observed. In 2019, an in depth field assessment and subsequent geotechnical engineering report recommended concrete strengthening and re-lining for both tunnels to prevent structural failure and minimise the future permeability of harmful contaminants. The existing concrete was estimated to have an average strength of 40 MPa but varied widely depending on the area.

The project was awarded to general contractor MJ Hughes Construction. With offices in Washington and California, MJ Hughes is an experienced heavy civil contractor that has a strong track record of success in structures, earthwork and utilities. It is known for embracing complex projects and strict schedules being ready to adapt to evolving project demands. Pat McSorley, who has been a superintendent with MJ Hughes for over five years, was responsible for overseeing all aspects of the Cornell Tunnel rehabilitation.

MJ Hughes subcontracted the task of removing deteriorated concrete to CCS Industrial Services. Based in Longview, Washington, CCS is an experienced contractor that provides a number of solutions including hydro demolition, industrial cleaning, hydro excavation, street sweeping, remediation and waste disposal. Since 2015, CCS has been using Conjet ACR robots to perform hydrodemolition work. CCS was confident that using the Conjet 557 MPA robot it could outperform other contractors that would attempt to complete the concrete demolition with jackhammers and breakers.

Hydrodemolition is a process that uses high pressure water to remove concrete or other surface materials. The technology has many advantages being said to be more efficient and productive than using jackhammers or other concrete breaker tools (Conjet estimates one robot can remove the same amount of concrete as 25 or more jackhammers). Hydrodemolition is also safer as operators are not exposed to silica dust or vibrations that are present with jackhammers and roto millers, as they can stand a safe distance away from the robot as it operates. Finally, hydrodemolition is a highly sustainable method for structural preservation as it does not create micro cracks in the remaining concrete. Pull off tests show that a hydrodemolition prepared surface forms a stronger bond with the new concrete overlay compared to the same surface that has been prepared with a jackhammer. This extends the structure’s useful life and reduces concrete consumption. In addition, hydrodemolition preserves and cleans the rebar reinforcement whereas jackhammering and roto milling damage the rebar and often requires significant replacement. Further improving sustainability on the project, the contractors recycled the concrete slurry wastewater and reused it for additional blasting reducing total water usage and disposal costs.

CCS’s fleet of hydrodemolition robots was supplied by Conjet AB which manufactures in Handen, Sweden, with a domestic subsidiary in Charlotte, North Carolina, which provides local sales and support to the North American market. In the 35years the company has been active it has focused on developing the technology to maximise ease of use, productivity and safety. Conjet’s innovation, collectively referred to as ‘Automated Concrete Removal’ (ACRTM) technology, is incorporated into every robot manufactured.

For the Cornell Tunnel, an important feature of the Conjet 557 robot was its multipurpose arm, or ‘MPA’. This allowed CCS, with the push of a button, to quickly relocate the 557’s cutting head to remove concrete from different angles and reaches on the overhead crown and vertical sidewalls. CCS stated that the flexibility of the 557 MPA was crucial for this project as the company needed the ability to quickly adapt cuts to different depths, angles and reaches in order to meet the engineering requirements. The 557 MPA allowed this to be accomplished with relative ease and, importantly, very quickly. Technical advice from Conjet’s customer success manager, Tim Best, was also provided on how to leverage the flexibility of the ‘ConjetONE’ control system to set the 557’s cutting parameters to fit the curved tunnel radius. As a result, CCS was able to perform this complex job without purchasing and installing any additional attachments to its 557.

Pat McSorley commented, “The Conjet 557 MPA performed great for us. I was impressed with CCS’s ability to easily adjust the robot’s parameters to the compensate for the radius of the tunnel. And due to the unexpected complexity of the concrete removal that was needed, the 557’s versatility was crucial to our success on this project.”

Unknown conditions cause plans to change

Work began in September 2021. Tunnel 1’s project specifications called for a 4m x 5.1cm strip to be removed at its crown for the entire tunnel length. The removed concrete would be replaced with shotcrete to seal and preserve the tunnel’s rebar reinforcement beneath the surface. Tunnel 2 had experienced more severe deterioration than Tunnel 1 over the years. As a result, the project engineers initially planned to use hydrodemolition to cut 30cm x 30cm ribs every 2m or so for increased structural stability. In addition, the plan called for the top 50mm of the entire overhead area and vertical walls to be removed and replaced with new concrete. Finally, in Tunnel 2 a new mat of #3 rebar would be added to the entire removed surface area, covered with mesh and filled with shotcrete. This would create a new reinforcement system to replace the original rebar which was damaged by the concrete deterioration and resulting permeability.

Tunnel 1 demolition operations went quickly and according to plan. However, as CCS began removing concrete on Tunnel 2, some unexpected challenges arose as it was discovered that not only was the concrete extremely deteriorated, the thickness was also very inconsistent, ranging anywhere from 20cm-61cm depending on the location. As a result, the original plan had to be abandoned. Rather than installing ribs, the PBOT engineering team decided to pivot to a new structural strengthening approach that involved cutting thicker 15cm x 30m panel sections. Each panel section would have a reinforcing mat of high strength #6 rebar. To maintain structural integrity during this process, each panel section would need to be cut to the proper depth, replaced with rebar and concrete and cured before work could begin on the next section.

CCS used the ConjetONE control system to easily adjust the parameters of the 557 MPA to cut at different speeds across the cutting head, ensuring a 15cm deep removal, even across the curved crown of the Tunnel. The MJ Hughes team then came back in and installed new rebar and mesh, filling in the new reinforcement system with shotcrete. The revised construction plan was executed successfully, with concrete repairs completed in April 2022. Pat McSorley stated, “In view of the unexpected challenges, we are extremely pleased with the outcome of the Cornell Tunnel restoration project. CCS exceeded our expectations with respect to the concrete removal work. The hydrodemolition process provides an incredibly efficient, high quality removal that is perfect for applying a new concrete overlay which will extend the useful lives of these tunnels for many years to come.”