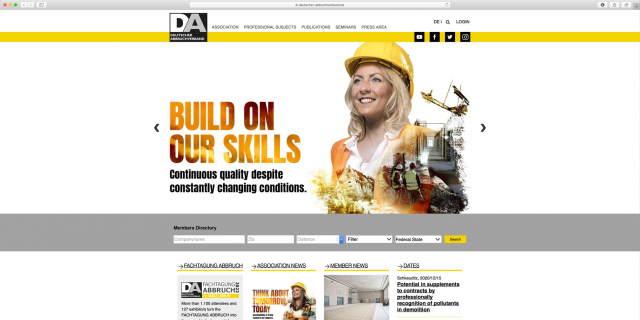 The Deutscher Abbruchverband – DA (German Demolition Association) has launched an image based campaign.

This was drawn up by a PR steering committee set up specifically for this purpose together with a Cologne advertising agency. The aim of the image campaign is to rejuvenate and modernise the entire external image of the association. The central graphic of the campaign focuses on six mission statements supported by visuals, with a red thread running through all the communication channels and communications of the association.

The mission statements are intended to show that the demolition industry is a progressive sector with its finger on the pulse ‘of time’ and at the cutting edge technology wise, with sustainability in demolition being central. DA members have been working on sustainability for decades, promoting the recycling of concrete, being the ‘bread and butter’ of the association’s members and thus one of the key messages to be put across.

The images and the further upcoming measures of the campaign were presented to the members at the General Assembly 2020 held in Cologne. The association’s website, which recently went online following the relaunch, was also presented there. The mission statements have a central function on the newly designed website and in all the social media channels of the DA and may be viewed at: www.deutscherabbruchverband.de