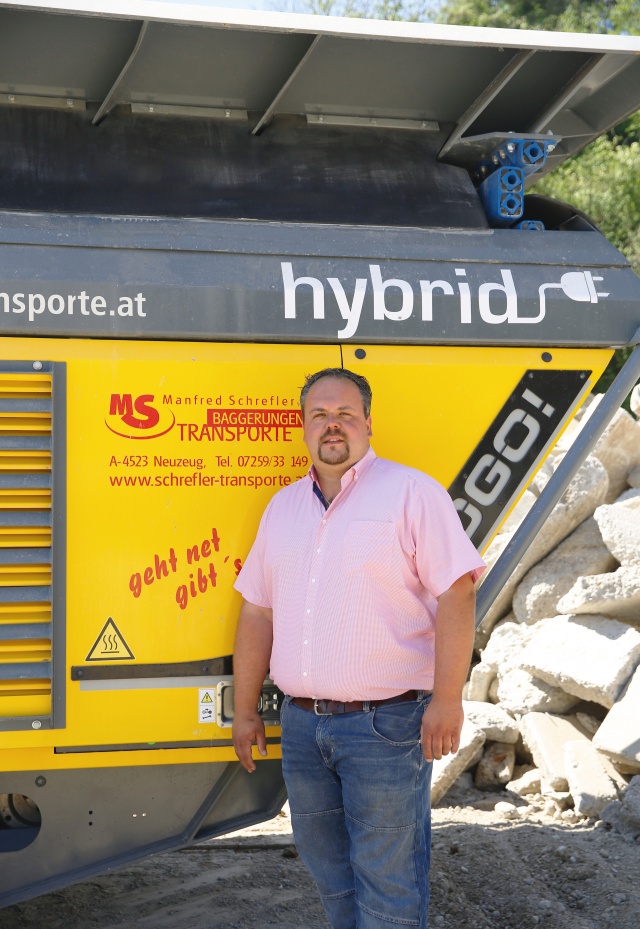 Manfred Schrefler has been operating his RM 100GO! in Neuzeug near Steyr since Spring 2019. Recycling now accounts for around 30% of his turnover with the company also having its own waste management consultant. Depending on the application, a mobile impact crusher is combined with the RM HS5000M prescreen, or uses the crusher on its own. Schrefler can now process concrete, asphalt and C&D waste as well as natural stone, gravel and excavated material.

With hybrid technology, RM is going one step further and giving the user even more on site advantages and flexibility: “When we crush using electric power, we manage even lower noise levels, which gives us a great advantage on inner city construction sites,” says Manfred Schrefler, founder and managing director of Manfred Schrefler GmbH. “With regard to emission regulations, with the RM 100GO! hybrid and its Tier 4 stage IV engine are among the best. Also, even though the new RM crusher is really great with its low fuel consumption, when I think about how diesel prices are developing compared to electricity, I can recycle more cheaply with an electric powered hybrid crusher.”

The relationship between the two companies goes back to when Schrefler became an RM testing partner for the company’s prototypes. That was how he came to start using the new RM MSC8500e hybrid screen that was launched at this year’s bauma trade fair in Munich. With a feed material of 0-500mm gravel, the RM hybrid crusher crushes to 0-63 mm while the RM HS5000M and RM MSC8500e screen the fractions 0-4, 4-8, 8-16, 16-32 and 32-70mm.

When Manfred Schrefler founded his company in 2011 with his partner Hilde Mitterhauser, the couple were only planning a small enterprise. Business in Neuzeug in the Upper Austrian district of Steyr Land flourished to such an extent that Manfred Schrefler GmbH made a name for itself all over Upper Austria as a provider of transport, earthwork, crane operations and the supply of gravel. The company now has 70 staff and the fleet now consists of approximately 38 lorries and 25 construction machines such as various diggers, wheeled loaders and, most recently, an RM hybrid crusher and an RM prescreen.