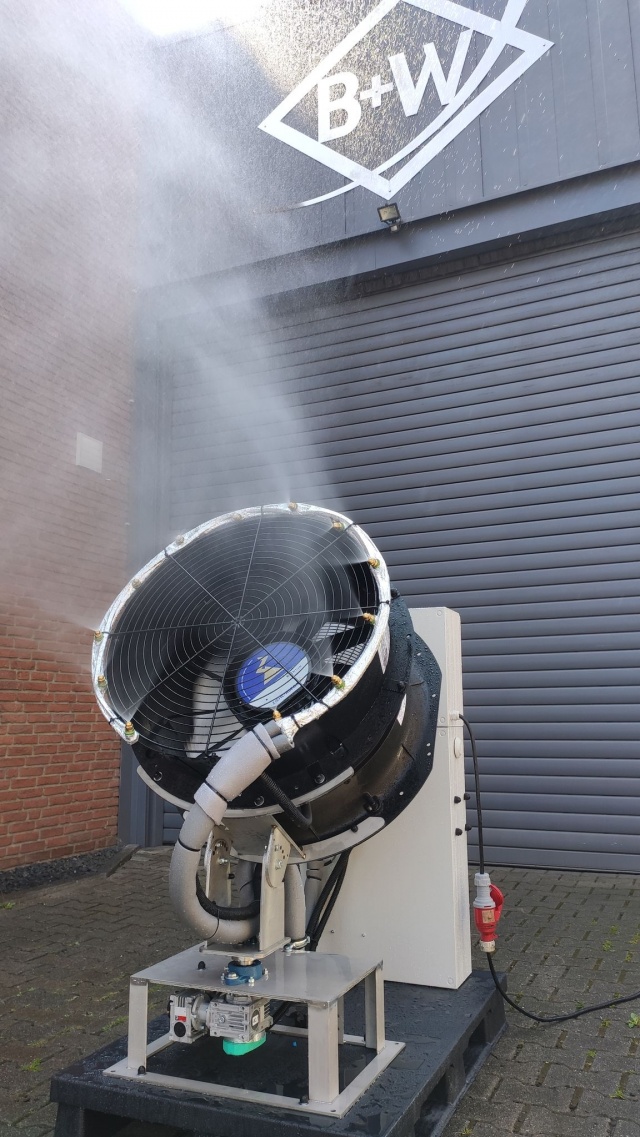 Companies such as BossTek, Dehaco and OZmist, to name but a few, have all introduced new products within the field of dust suppression. Read about them here in this special feature on dust suppression equipment.

Dehaco’s rotor technology is a method conceived specifically for dust control. Suitable for demolition, waste management and fire control, to name but a few applications, Dehaco believes the technology overcomes two drawbacks that previous solutions have been hampered by. Firstly, objects that are the size of a pen tip (0.5mm) are large enough to block a nozzle, and when equipment has to stop work because the nozzles are blocked, large costs are incurred and deadlines can be missed. With Dehaco’s dust control unit Tera, the smallest opening is 3mm. Any contaminants in the water are expelled from the rotor. Furthermore, Dehaco’s ‘400V’ series of machines can distribute droplets regardless of whether the user has a 100, 500, 1,000 or 4,500l/h water supply. Since the water supply is not a defining factor in the performance, the droplet size can be adjusted with the turn of a switch, and as the spinning rotor literally slices the water into droplets, it works using the mains water pressure. What’s more, the Tera dust control units can be equipped with UVC lamps to help mitigate Legionnaires disease which is spread through airborne water droplets, exactly the delivery method Dehaco uses to prevent dust from spreading. Dehaco’s believes its solution using UVC lamps destroys the bacteria before it reaches the rotor. A unique feature of this setup is that the strength and quality of the UVC light is monitored and a visual indication is given of its performance. Dehaco manufactures a complete series of dust control solutions, from a range of 5m for strip-outs and renovations, all the way up to 90m for expansive sites and high reach demolition.

Dynaset’s new HPW hydraulic high pressure water pump model ‘HPW 160-18/18’ is specially designed to power up its HPW-Dust high pressure dust suppression systems, and can also be used as a power washer. It is the smallest model of the HPW line up in power output and in dimensions. The main improvement in the latest variant is the brand new piston model, with a simpler structure of the pump. The new model is designed for dust control applications and can be used, for example, for street sweeper dust control and for dust suppression of small pulverisers and drilling rigs. In the case of demolition machines, the Dynaset HPW-Dust’s nozzles are installed either at the end of the excavator’s boom or directly on the demolition tool. That way, the atomized water mist is targeted where the dust is emitted, and the particles are trapped under a cover right after they are created. The compact dimensions have also been highlighted as an important feature.

JPT Jaskari, which manufactures pieces of equipment for the Finnish brand Serco, incorporates dust suppression systems into brush attachments, with the HPW 160 being one of the models used in Serco’s products. “In our brush buckets, there is a small compartment for the pump and the pump fits there perfectly,” says Juha-Pekka Jaskari, owner of JPT Jaskari. “The markings of the pump are very simple, and all the connections are super handy to do. Simplicity is always good and also users appreciate this because often it means reliability.”

WLP’s Special Duty Line includes the ‘WLP 700 Fog For Dust, FFD’, which has been created in cooperation with Ravasini. FFD is a sanitising 'fogger' machine formed by a tank for industrial water transportation and a WLP 700 spray cannon which together generates micro droplets (which can also be mixed with disinfectant), with the average throw distance being approximately 70m. Another product within the Special Duty Line is the ‘D50 Tank’. The system consists of three main parts: a WLP ‘Demolitor 50’ placed on a frame that includes a 5,000l tank and a generator that, according to WLP, guarantees complete autonomy in all conditions. These constituents are then assembled on a road suitable certificated trolley. In view of the ongoing sanitary emergency, WLP has also used its know how to design and produce sanitation machines. This has led to the creation of the ‘Sanitank 300’, equipped with a 300l tank, which is WLP says is characterised by high efficiency and smooth functioning at 4.5kW. The Special Duty Line can be installed on hydraulic arms through special supports mounted on columns or walls. The mounted generator and cannon barrel can be configured in complete autonomy.

The ‘DustBoss Atom’ from BossTek features a fan less, self-contained design that incorporates remote control and ‘4G LTE’ telematics technologies as standard equipment to deliver a combination of suppression and monitoring. The compact, diesel powered unit fits in the back of a pickup truck, so it can be positioned and relocated to address dust generating activity directly at source. It also has fork lift pockets on the front and back. The unit features a Kohler KD440 power plant, a 6.78kW (approx.) air cooled engine that meets Tier IV Final emissions standards and complies with California CARB requirements.  The air filtration system increases performance and lengthens service intervals, even in dusty environments, according to BossTek. Its integrated fuel injection system and overhead cam design are coupled with a cast iron cylinder liner. The engine and pump subassembly is secured by four isolation mounts that minimise vibration transfer to the frame. The high impact stainless steel nozzle features a quick disconnect for easy replacement, and has built in communications features. The system is fitted with a Cat Pumps ‘56G1’ water pump that requires 0.344bar minimum inlet pressure, connected by a 25.4mm ‘cam-and-groove’ fitting. The unit has specially formulated seals and high density polished ceramic plungers. It also includes protection against pressure drops; when a low pressure situation is detected, the unit shuts down to prevent damage to the pump or overheating of the engine. With a throw of 30m, the adjustable elevation angle and user defined oscillation allow precise aiming of a dust capturing mist. The mist comprises of millions of droplets p/min in the range of 50-200 microns.

EmiControls new trailer, which has road approval, enables its V12s turbine to be easily transported from one location to another. The trailer hitch has an articulated joint and can therefore be used for any type of car or means of transport, with four stabilisers providing what the company says is a ‘good and safe stand’, even on uneven terrain. EmiControls also states that thanks to the use of resistant materials for turbine and trailer, a long lifespan is guaranteed, and if required, the V12s dust controller can be mounted and dismounted from the trailer. Thanks to its low noise emission, the V12s can be used in city centres and populated areas. The turbine has two speed levels, which makes it possible to spray the fine water mist at ranges of 25m to over 65m. A manual version of the dust controller, the ‘V12s Basic’, is newly available, modelled on the V12s but with manual swing and height adjustment. EmiControls also released a new stationary dust suppression system, the ‘H2 Pump’. It has been specially developed for use in smaller plants. The special feature of the H2 Pump is that the fogging technology ensures efficient dust control while requiring little water. In addition, its small size allows it to be installed directly at the dust source. Optional extras such as automatic draining, heating and line cleaning are also available.

Terex, better known as a global manufacturer of lifting and materials processing solutions, has introduced ‘Aquamist’ by Terex, a dust suppression system that is now available across its materials processing brands,  EvoQuip, Fuchs, Powerscreen, Terex Ecotec, Terex Finlay, Terex MPS and Terex Washing Systems. According to Terex, Aquamist offers an improvement over conventional jets or water sprays to manage the build-up of dust and better protect workers on jobsites by using a high capacity misting fan that produces finely divided water droplets in the size range 10-150microns. Terex believes at this size they easily combine themselves with dust particles of similar dimensions and precipitate them out of the air and, because water mists ‘float’ more than a conventional spray, they cover and envelop the dust cloud more effectively. “It is globally accepted now that airborne dust that is formed on jobsites can significantly contribute to respiratory illnesses,” says Paul Kearney, vice president of Parts and Solutions, Terex Materials Processing. “As increased legislation comes into place globally to mitigate this, more effective control of dust is needed. Our Aquamist system will better support worksite operations and strengthen our commitment to making the workplace a safe and healthy environment.”

A few years ago, Australian manufacturer OZmist released the ‘T45’, a self-contained trailer mounted mist cannon for combatting fugitive dust hazards on the worksite. The cannon was fitted on top of a 2,000l water tank with heavy duty off road tyres, and was the first iteration of OZmist’s ‘Ultra Heavy-Duty Dust Suppression’ range. In 2020, OZmist refined and modified the T45 and gave it a new name. OZmist took the core design and produced the ‘M45AU’, a mist cannon that, according to OZmist, holds the same values as the T45AU but has been removed from the trailer and given a slightly smaller water tank. The water tank is fitted with fork lift type mounts on the front and the back, meaning that the machine can be picked up and moved via a fork lift or crane. Key features include a 45m throw from the 5.5kW fan motor; oscillation from left to right up to 340°; an electric actuator that lifts the fan outlet over 45°; a Makinex/Honda 16kVA petrol generator, which the manufacturer says provides one tank of fuel for 8h of operation time, with three phase and 12V contained in a water proof and dust proof enclosure fitted to the rear of the tank. Its remote control has a 100m range whilst there is a 1,200l capacity water tank. It is also fitted with internal baffle plates for reducing sway make transporting a full unit simple. It also has a 76.2mm cam lock inlet and 50.8mm drain outlet. Internal power cabling is from front to back whilst its OZmist 18l/pm three phase industrial mist pump pressurises the tank water to 68.94bar, and is fitted to slide rails behind a hinged door below the fan. The dry weight of the unit is 600kg.

OZmist is also currently working on a new cannon variant, the ‘S45AU’. This will not feature an integrated water tank and is designed to be installed on the rear of water trucks or positioned on a worksite with a dedicated water source. The new cannon has a Makinex/Honda petrol generator installed (optional). The unit is nearing the final stages of production and will be released in the summer of 2021.

B + W is now installing a water meter in all of its water fog systems, enabling the water which is about to be sprayed to be flow monitored. The company says that the key advantage being that leaks in the system are now able to be detected the same way as blocked nozzles are. The consumption of nozzles is monitored by the water meter; thus if leaks occur, the increased water consumption is recorded and the system goes into malfunction thereby conserving water resources. Furthermore, not only is the maximum flow monitored, but also the minimum, which according to B + W, is important for noticing clogged nozzles. If these do not generate a fine water mist, the de-dusting performance is no longer guaranteed. Here, the water meter takes effect again, as if the water throughput falls below the minimum, there is a signal. The company has designed its water nozzles to be low maintenance, being easily cleaned quickly, with the screwed on filter being designed to be loosened with a screwdriver and cleaned under running water.