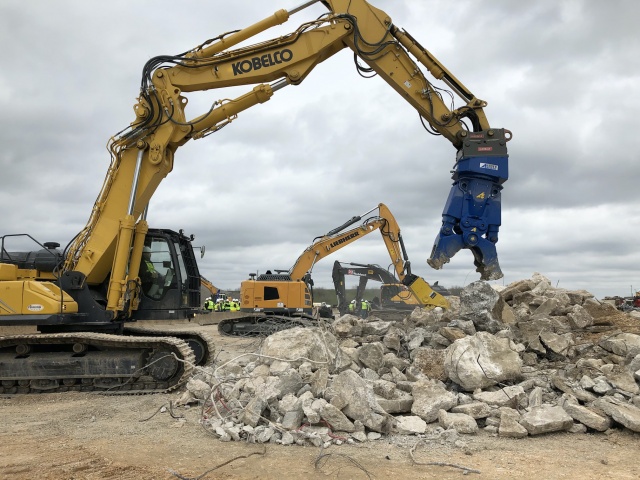 The National Demolition Association rolled out a true Texas welcome to nearly 1,000 members, vendors, and guests at Demolition Austin, the 2020 edition of its annual Expo and conference.

The good turnout for the event, held just two weeks before Conexpo/Conagg, reflected both an outstanding line up of activities and presentations, as well as the overall good health of the demolition industry. “There’s good energy here,” observed NDA president Christopher Godek, who is also the owner of New England Yankee Construction LLC of Wallingford, Conn. “The economy is good, and contractors are busy.”

The official opening of Demolition Austin was held later on the evening of the first day, with a ribbon cutting ceremony and Expo opening reception at the Austin Convention Center. This would be the hub of activity for the next few days, with 84 exhibitors on hand to share their latest products and, perhaps more importantly, gain insights from current and prospective customers. “Our relationship with manufacturers is one of the strengths of our industry,” said Godek. “They do a great job of listening to members about what they need out of machines. We thank them for being here, and for their ongoing collaboration.”

Compared with Conexpo/Conagg and other larger shows with multiple manufacturers competing for attendees’ attention, Demolition Austin provided a more intimate environment for discussions, particularly for those companies looking to raise their profile in the North American market. “We’re glad we’re here,” said Mani Iyer, president of LiuGong North America, which had some of its larger pieces of equipment operating at the Live DEMOlition event. Iyer observed that members who took advantage of the opportunity to take the machines’ controls were impressed with the ease of operation and ruggedness. He believes these and other features will help LiuGong compete in what is already a crowded equipment market. “We plan to open a manufacturing plant in Wisconsin, and already have many research and development centers and joint venture relationships with component manufactures.” Iyer added that even with uncertainties such as the US election and other factors that could alter the construction market the company has planned well for the future.

Demolition Austin was also about learning, with educational offerings ranging from a ‘boot camp’ for aspiring superintendents and foremen. These included navigating the tricky, often contentious challenges of succession planning for family owned businesses; an increasingly widespread challenge in the construction industry as first and second generation company leaders contemplate retirement. NDA’s famed ‘quick hit’ speed learning presentations covered topics such as the foundations of demolition management, regulatory and market updates, use of NDA’s safety app, and several others. Safety was a pervasive topic on the education side, with presentations from representatives of OSHA and Texas Mutual Insurance Company.

One of Demolition Austin’s many highlights was Monday’s keynote address by workforce strategist and management trend spotter Seth Mattison. Although his career as an advisor on key shifts in talent, leadership, and the future of work, has taken him around the world, Mattison is no stranger to physical work having grown up on a fourth generation family farm in southern Minnesota.  During his address, Mattison emphasised that while many of the industry’s older members literally and figuratively grew up in organisations dominated by hierarchical models, today’s workforce is more attuned to networks with multiple ongoing and ad hoc relationships and lines of communication.

While neither model is inherently right or wrong, businesses need to undertake ‘shifts’ in order to strike the optimum balance between the two so that they can create a more engaged culture better aligned with the needs of the current and future economy. Technology is often a convenient starting point for many firms, but the most important shift may be in the customer and employee experience, which Mattison stated mirror each other. That means showing employees that they are truly valued and cared about, not simply names on a pay slip. “That was one of the biggest takeaways for me,” Godek said. “We get to go out and do amazing things in our industry. It’s nice to hear that it’s ok to tell your workers you care about them.”

The busy day at Demolition Austin wrapped up appropriately with a ‘Toast to Texas’ reception at the nearby Bangers Sausage House and Beer Garden. The event was a mixer in every sense of the word, with lots of networking, dozens of craft beers on tap, tasty Texas food, and a local band that attracted no shortage of dancers. As the good times echoed into the night and into the next day’s final activities (NDA’s annual awards banquet and Demolition Hall of Fame induction) thoughts were already turning back to the working world and what the remainder of 2020 holds for the industry. “History would tell us it has to slow down,” Godek said of the current decade long construction industry boom. “Aside from low scrap prices, which are usually up in big economy, our members seem to be in good shape. We’ll just have to see what happens.”

In the near future, Godek says NDA will continue to promote industry manufacturer collaboration, finalise a formal alliance with OSHA, and encourage certification and professional development among its members. Harkening back to Mattison’s keynote, he noted that providing employees with opportunities to learn and grow is a key element in building stronger, more resilient company cultures. “One of most important things is to feel like you belong. And the inherent nature of family owned businesses sometimes makes that difficult to convey. We hope the ideas we provide can help change that.”