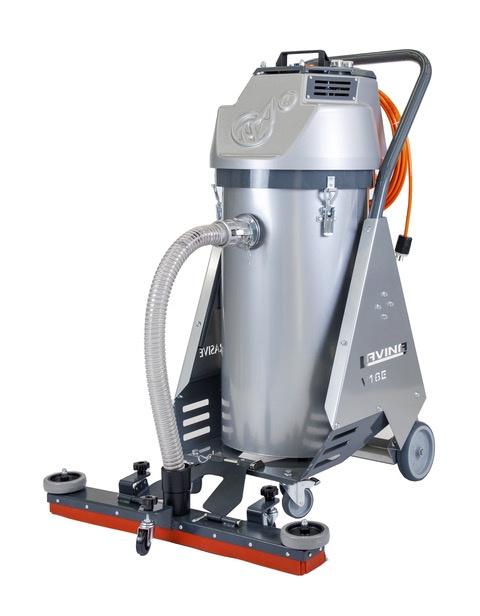 The harm caused by dust is now well established with equipment to combat it having been specially developed. In this special feature, we take a closer look at Superabrasive’s and Scanmaskin’s vacuum cleaners, plus a dust suppression system from Dynaset.

Frankly, 2021, was quite a lean year in terms of new systems and equipment that lower or eliminate the amount of dust in the air at a worksite. However, there have been a few new developments of interest.

Superabrasive has upgraded the Lavina line of dust extractors with the new ‘Elite Series’ models which offer, in Superabrasive’s own words, ‘improved efficiency and performance’. The newest addition to the line-up is a smaller wet and dry vacuum, V16E. It has a heavy duty stainless steel body with a 50l tank capacity, and is offered in single phase, 115V and 230V models. It features include overfill shutoff, a washable hydrophobic filter with protective sleeve, a wand and optional squeegee for slurry. The dimensions are 65cm x 50cm x 100cm and weighs 50kg. The maximum airflow is 160m³/h, and the maximum vacuum strength is 88 water lift, 0.22bar.

Released last year, Scanmaskin’s ScanDust 9000 World Series is its largest and most efficient industrial dust collector, and features increased filter capacity and built-in pre-separators. The company states that its patented pre-separator separates dust into two stages and provides up to 90% pre-separation. This means that the user does not need to clean the filters as often, which provides a longer filter life and fewer resulting interruptions for maintenance when compared to traditional industrial dust collectors. Since the pre-separator is built into the machine, it is always available, which means no extra equipment needs to be handled or transported.

The filter area of the ScanDust 9000 World Series is 4.2m² and consists of 32 Teflon coated sock filters and two Hepa 14 filters. The Hepa 14 provides a filtration rate of 99.995% and takes care of the very smallest and most dangerous particles despite a very high air flow. The electric version of the ScanDust 9000 World Series is equipped with a frequency control drive which allows the user to adjust the power and speed depending on the application. The combination of this, together with high filter capacity and high airflow, allows the user to connect more machines to the same vacuum cleaner.

The ScanDust 9000 World Series has a height adjustable cyclone and is also equipped with solid rear wheels and 200mm large swivel wheels. Scanmaskin states that the World Series design makes servicing simple as the user can easily access all parts and does not need to disassemble the machine to gain access. The vacuum cleaner is equipped with a filter guard that warns the user when the filters need to be cleaned and a ‘Jet-Pulse’ cleaning system that pulses the filters to keep them clean without the user having to come in contact with the dust. The Longopac bag system is incorporated into the ScanDust 9000 which also features a steel construction and 95% recyclability.

Dynaset’s dust suppression system, HPW-Dust, has recently been used in mining and quarrying applications. The HPW-Dust’s high pressure atomised water mist binds dust with Dynaset stating that the water consumption is set at an optimal level. End users of the HPW-Dust High systems have been reported as being ‘satisfied’ with the results as the atomised water is an effective solution against dust pollution, but also does not dampen the whole worksite.

One example of the HPW-Dust being used concerns a drilling rig that was used in a mining application in China. In this example, the nozzles were placed behind the drill head of the system. The system itself is designed to create a mist curtain around the drill head to suppress dust emissions that arise while drilling. In another case, the HPW-Dust was used for controlling the dust emissions of a crusher, something that required minimum water consumption. Dust suppression nozzles could be targeted accurately so the dust suppression did not wet all of the material that went through the machine. In this particular case, dust control was targeted to suppress dust that was born when the material fell into the conveyor. Dynaset states that the dust suppression nozzles can be installed to cover all identified spots on a machine where the dust emissions arise.