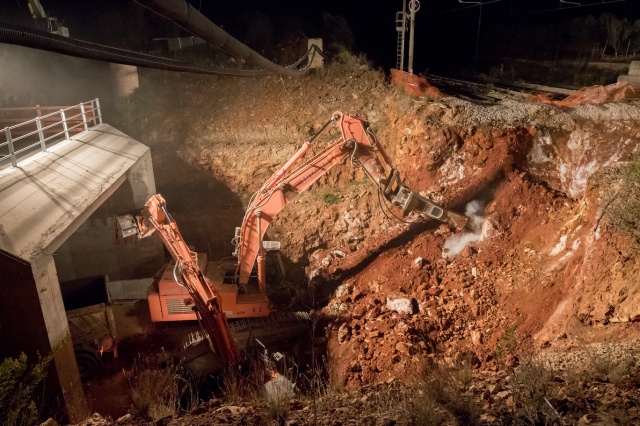 The excavation job on the project involved digging a series of cuttings, tunnels and embankments for a double track railway between Bari Sant’Andrea and Bitetto (about 10km in length) along the Bari-Taranto line, to replace the existing single track. The aim of the project is to connect the two Apulian cities with a high speed line. The second track is being laid along a totally new route, which means getting rid of no less than six level crossings in the town of Modugno, helping both to increase the amount of rail traffic and to ensure faster train journeys. The excavations and reinforced concrete works were entrusted by RFI SpA, a company in the Ferrovie dello Stato group, Italy’s national rail corporation, to Matarrese SrL.

The overall length of the stretch involved is 12km, including 2km along the pre-existing route, as well as 10km of new line along a cutting where 1.5Mm3 of limestone had to be excavated. The main hammers used for the excavations were an Indeco HP 9000 and two HP 7000s. Daily production was approx. 750m3 for the HP 9000 and 550m3 for the HP 7000 over the course of around 800 working days. This was in line with expected performance targets.

At the intersection with the pre-existing track, night trains had to be cancelled, leaving just 55h to build the new underlying rail section and put back the overlying track. For this part of the job, an Indeco HP 18000 hammer was used, which reduced excavation times from the 20h planned to just 8h, with hourly production of about 500m3.