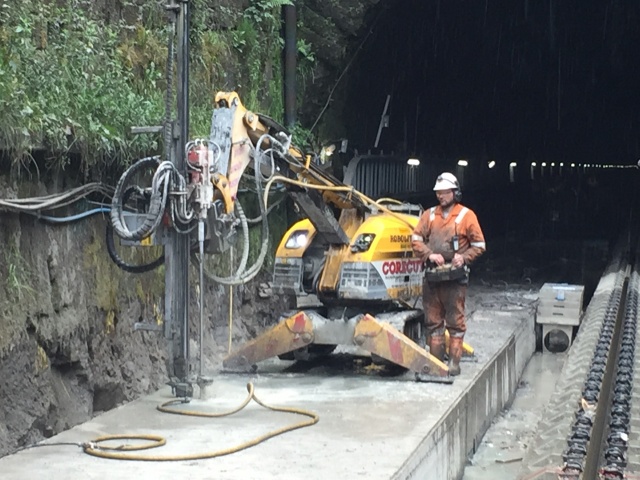 Core Cut’s work, which included the removal of 1.8km of the 500mm to 750mm thick concrete track slab in the station’s tunnel, was carried out in two phases working round the clock during a 20 week period between March and July 2016.

The first phase consisted of core drilling almost 8,500 holes of 112mm diameter to a depth of 500mm. This allowed the use of hydraulic bursting equipment to crack the track slab following 2,750m of track saw cutting to both lines to separate the concrete track slab from the tunnel walls in the second phase.

The second phase included longitudinal saw cutting using Hydrostress WS2226 saws and transverse saw cutting of ladder beam sections using a Tyrolit CC22/12 slab and track saw. This included about 3,670m of 520mm deep longitudinal floor saw cutting between the rails of each line and over 1,500m of 3.5m long by 520mm deep transverse cuts in the ladder beam sections. This was followed by hydraulic bursting and breaking out of about 10,000t of concrete with its Brokk 260 to accommodate the replacement slab. Core Cut then used its Brokk 260, fitted with a hydraulic rock drill, to drill 3,500 holes to a depth of 3m to accommodate dowel bars to anchor the new slab to the tunnel bedrock.

“The Queen Street tunnel represented a significant challenge for our team, which worked diligently in difficult conditions across almost 100 days to complete the work,” said Core Cut managing director Finlay Crocker. “Given the environment and tight deadlines we had to contend with, it is particularly pleasing to us that we were able to complete the work safely, within budget and nearly a week ahead of schedule. It is testament to the quality and work ethic of those involved.”

Story Contracting was equally pleased with the outcome. “It was a fantastic effort throughout by everyone involved at Core Cut,” said Story Contracting Location Scheme project manager Eddie Esdale. “A very innovative solution was proposed and delivered. Without it, the project may not have progressed as smoothly as it did. A professional approach from all operatives on-site ensured the safe delivery of the works ahead of programme.”