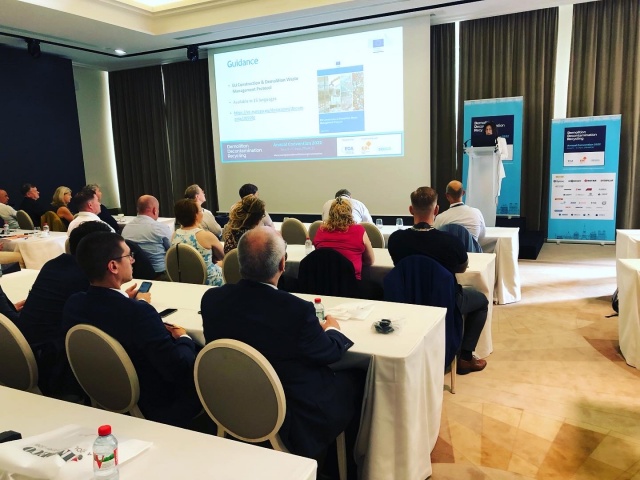 After more than two years of the physical absence of annual conventions there was finally time for the European Demolition Association to meet up, with the 2022 annual convention being held in the heart of Paris.

Meeting in several locations of Paris

The EDA's annual meeting 2022 was held on 9 and 10 in Paris. In total, more than 200 delegates, suppliers and speakers attended the meeting. The conference began on 9 June at the Sofitel Paris Baltimore Tour Eifel Hotel, where workshops and lectures were held throughout the day. The day began with a workshop with the headline, ‘Equipment and Technology for DDR’, where several suppliers had the opportunity to present tools, carriers, quick-couplings for tools, long reach demolition machines and more.

After lunch, a lecture was given on circular economy in the construction and civil engineering sector by Johan Vyncke, Rilem, Elma Durmisevic, Laboratory for Green Transformable Buildings, and Miguel Ángel Pérez-Penalava, Hercal Diggers. The day continued with EDA's general assembly for its members. On the evening of 9 June, a welcome cocktail party was held at The Renaissance Paris Nobel Tour Eiffel Hotel.

On 10 June, the official opening of the annual meeting and conference was held at 9a.m. at The Pavillon Dauphine Saint Clair. Directly adjacent to the conference hall was an exhibition hall where more than 24 suppliers and sponsors had their stands. Gold sponsors of this year's meeting were Caterpillar, Rotar, Epiroc and Sennebogen. Silver sponsors were Liebherr, ACDE Europe, Trevi Benne, Steelwrist, Lehnhoff, Indeco, Husqvarna Construction Products and MBI. Bronze sponsors were NPK, OilQuick, KTEG, AMS, Arden Equipment, Dehaco, Kemroc, Komatsu, Volvo and Demarec. PDi Magazine of course was among the exhibitors as usual and also covered the convention. The meeting participants were able to visit the exhibition during coffee and lunch breaks.

The conference day began with the official opening of a meeting by the president at the time, Francisco Cobo. A new president had been elected at the general assembly the day before, which was to be announced on the evening of 10 June. The day continued with the first session until the coffee break. Fulvia Raffaelli from the European Commission's DG Grow spoke on EU policy for a circular economy. William Sinclair from Safedem talked about best practices and technical challenges for demolition with explosives. Holly Price presented a case story with the heading, ‘Challenges for DDR in the UK and how to overcome them’.

The day then continued with Karol Baran from Group Tree on the subject of innovations and smart demolition practices in Poland. Souhila Paré from SEDDRe spoke on the subject of ‘New asbestos' challenges in Europe’. Vittrio Omini from the demolition contractor Omini Demolizioni Industriali, gave an interesting presentation about the demolition of the Morandi Bridge in Genoa, Italy. Lunch followed which was served in the exhibition hall, and at the same time delegates had the opportunity to visit the exhibitors' stands.

Then the day continued with Riccardo Viaggo from CECE speaking on the topic, ‘The twin transitions seen from the machinery sector’. Brian Priestly from Priestly presented the case story, ‘Rapid demolition of the Gardiner Expressway ramp’. Another case story was presented by Anna Chtorkh from Curium, namely, ‘Decontamination of hazardous substances at industrial facilities’.

Following a coffee break and a visit to the exhibition, the day continued with Thomas Kasper from Porr Umwelttechnik who spoke on the subject, ‘The contribution of recycling to a circular construction branch - Austrian approach’. David Assaf from Greenmix Benny & Zvika spoke on the topic, ‘From demolition to production of secondary raw materials’. Patrick Frye and Ivan Poroli from cadem and Despe, respectively, delivered a lecture on the collaboration in the demolition of a train station in Lyon, France. That was the end of the professional programme for this year's EDA convention.

Gala dinner at the Eiffel Tower

Around 6.30p.m. in the evening, it was time to leave for the gala dinner held in Gustave Eiffel Hall, which is located on the first floor of the Eiffel Tower. Guests were bussed to the Eiffel Tower and taken by lift up to the first ledge which offered a fantastic view of a beautiful and clear Paris. Before the actual dinner, a welcome reception was held, which was opened by EDA secretary José Blanco. The dinner was sponsored by the French manufacturer of attachments, Arden Equipment, and a speech was delivered by Daniel Dupuy, sales and marketing manager for Arden. During the dinner, live music was performed and the evening ended with the traditional EDA's new president, Stefano Panseri, being welcomed by the leaving president Fracisco Cobo. There were speeches by both Cobo and Panseri and Panseri's young daughter surprised with a warm speech about her father.