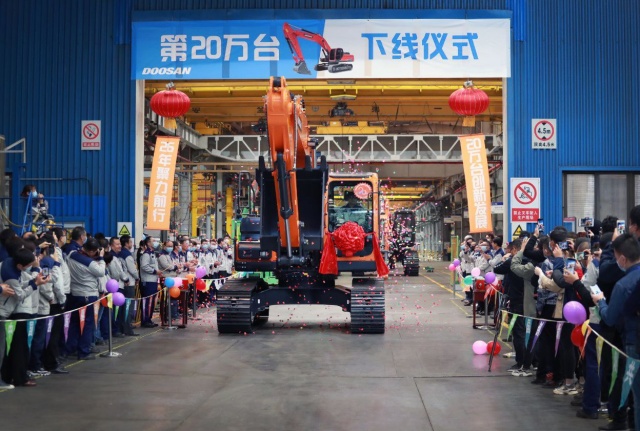 26 years after entering the Chinese market, Doosan’s annual sales and quarterly sales revenues grew by 21% and 55%, respectively, surpassing the 200,000 mark in the cumulative production of excavators in China.

To mark its momentous achievement, Doosan Infracore China invited employees, dealers and customers to its Yantai plant and to attend a ceremony to celebrate the production of its 200,000th excavator in China. The event, which was broadcast live online, featured the handover of the 200,000th excavator to its customer.

Doosan Infracore has steadily strengthened its market position in the Chinese market for excavators manufactured, increasing its market share from 12.9% in 2015 to 22.8% in the third quarter of 2020. The Chinese excavator market recorded its largest ever annual figure of 200,000 units in 2019. However, it contracted for about two months in the aftermath of the Covid-19 crisis at the beginning of 2020, but has recorded rapid recovery since March.

In line with the growth of the Chinese excavator market, Doosan Infracore continues to release new products and special equipment customised to the requirements of Chinese clients. This saw the company launching a new 6t wheeled excavator in July 2020, as well as an enhanced equipment inspection service campaign. It has also conducted online service training for a total of 7,300 agents based at its dealerships across the country.