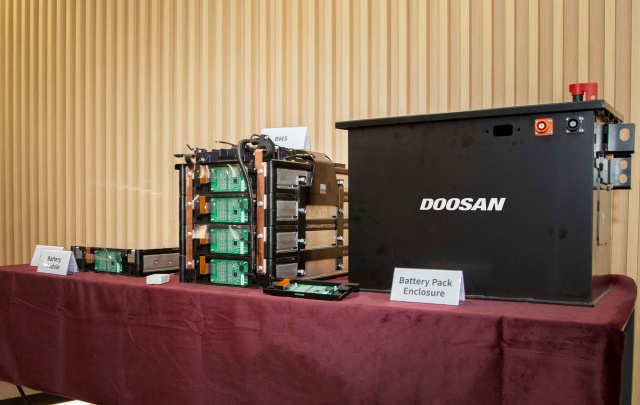 A battery pack is the final form of the battery system mounted on motorized machines. It is configured with control and protection systems, such as a battery module that bundles a certain number of batteries in cell units into a frame, a battery management system (BMS) and a cooling system. Doosan Infracore’s battery pack offers the advantage of a flexible design to meet unit voltage and capacity requirements by combining standardised cylindrical battery cells. Using the BMS, the standardised and shared design has been applied to enable battery pack configuration with up to 32 modules regardless of parallel or serial connection. The battery cell offers improved energy density and stability by using structural adhesive physically and wire bonding electrically.

Doosan Infracore has been developing battery packs after completing a feasibility review of the electric power pack business last year. Having developed the prototype, it plans to manufacture an initial 1.7t electric excavator with the battery pack after testing it while mounted on actual equipment.

Doosan states that the battery pack can be mounted on all electrically driven vehicles, such as construction, mining and agricultural machines and golf carts. The company has set an annual sales target of €365M or more in the battery pack business by 2030.

“We are Korea’s best engine manufacturer and have developed engines for vehicles, ships, industrial machines and military machines and for export to Europe including Germany, the leader in engines, and China. We intend to become the leader in the global engine market by accelerating the development of hybrid powertrains and developing electrical drive technologies in this great paradigm shift in internal engines,” said Doosan Infracore CEO, Sohn Dong-yeon.