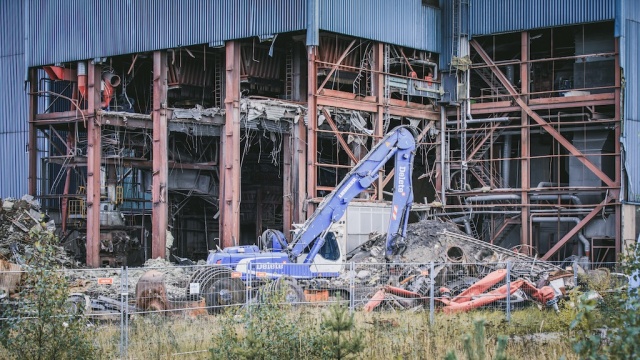 Delete pulls the plug on two power plants in Pori

Finland is one of the world’s most environmentally conscious countries. For the past decade, the Finnish government has been actively pursuing a policy of carbon footprint reduction. In November 2016, it approved the National Energy and Climate Strategy that should result in an 80-90% reduction in greenhouse gas emissions by 2050. Phasing out coal for energy use is an integral part of this strategy, with Delete Demolition Ltd., a Helsinki based specialist demolition and recycling contractor, is doing its bit for the environment by helping decommission two coal fired power plants in western Finland.

The Tahkoluoto power plant is located on the seafront of Pori, some 30km from the town centre. Commissioned in 1976, this coal fired facility has undergone a number of upgrades and modernisations over the years aimed at raising its environmental standards. In 1993, a flue gas desulphurization plant was added, followed by the installation of low NOx burners to reduce nitrogen oxide emissions a year later. In 2006, the combustion technology was modified to further lower nitrogen oxide emissions. All those measures notwithstanding, the plant’s operations were first suspended in late 2015 and then its operator PVL, a fully owned subsidiary of energy giant Pohjolan Voima, made the decision to dismantle it by 2020.

In 2016, PVL announced a turnkey tender for the demolition of the Tahkoluoto plant in which all major contractors based in Northern Europe were invited to participate. The objective was to clear the site to the ground level with the exception of the turbine hall. All machines and infrastructure in the turbine hall were to be removed, but the building itself would be reconstructed by the specifier for further use. Delete was chosen on the grounds of the proposed demolition method, its safety and environmental protocols and competitive pricing. In early July this year, Delete deployed a team of some 20 operatives headed by project managers Raimo Hantunen and Petri Kuusisto along with site engineer Hannele Nousiainen to Tahkoluoto to get the demolition process started.

Apart from the typical industrial demolition challenges - massive heavy structures, dizzy heights (up to 60m) and the presence of asbestos - there are some site specific obstacles that the Delete team has had to overcome at Tahkoluoto. These include a non-standard boiler construction, an active high concentration ammonia line going through the site and the requirement to keep the turbine hall intact, which restricts manoeuvrability. An adjacent power plant, which is still operational, further limits onsite mobility. Last but not least, there is a whopping volume of steel to process, currently estimated to the tune of 10,000t. To navigate these obstacles, Delete brought a large fleet of heavy duty equipment to Tahkoluoto. A demolition specified Liebherr 974 excavator with a 41m boom is tackling the high reach side of the project. Two material handlers – a 40t Liebherr machine and a model with an elevating cab - are being used to collect and take away demolition debris. Two bobcats and a few other telescopic handlers take care of day to day lifting and hoisting tasks while a Hitachi 1200 excavator is employed for dismantling heavy steel structures.

In line with circular economy fundamentals, the materials that the boiler at Tahkoluoto is made of will be reused through smelting. If everything goes according to plan, Delete will finish demolishing the Tahkoluoto facility in late March 2020. In parallel, the Finnish contractor is preparing for the upcoming demolition of another coal fired power plant located in the neighbouring town of Kristinestad. The full scope of demolition work in Kristinestad is now being evaluated, with completion projected for late 2020.