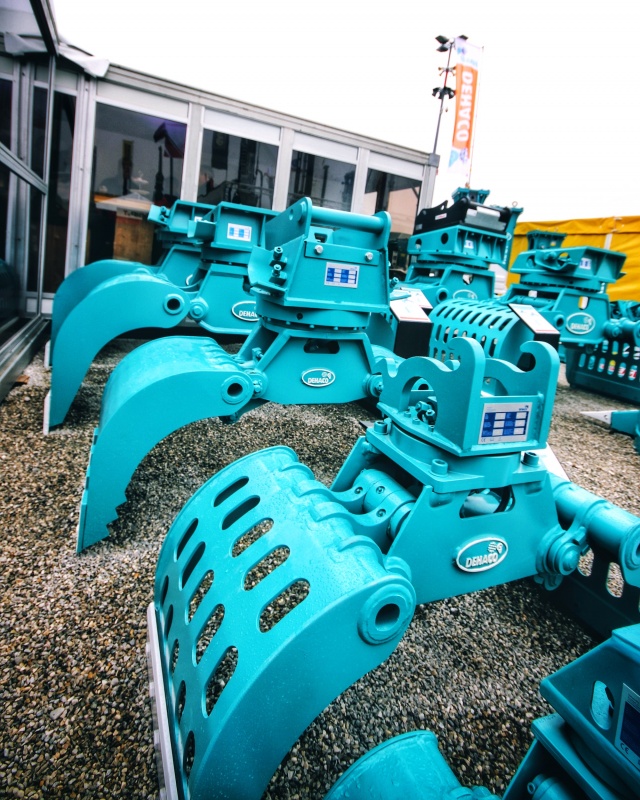 Dehaco gets ready for bauma 2022

After a two year wait, bauma will finally take place from 24 to 30 October 2022 in Munich, Germany. Dehaco will of course be present at stand number FN624/7, when the company’s stand will once again feature many eye catching ‘turquoise’ products.

These will include Dehaco’s well known demolition and sorting grab series, which are available with various adapter plates, including a DSG1104 with a flat adapter plate. This grab is part of the 04 series which was launched in 2020, and now consists of nine models, with the parts subjected to the heaviest wear being reinforced. The frame bushings have also been reinforced, the welds between the frame and the bushings improved and the main pins are now longer. The thickness of the shell tubes have been increased and extra bolts added to the blades.

As the Dehaco name is an abbreviation of ‘The Hammer Group’ in Dutch, the company will of course bring a selection of demolition hammers from the GS and HS series.

Dehaco will also exhibit its entire series of floor strippers in Munich. Dehaco floor strippers are designed to easily and efficiently remove all types of floor coverings and be easy to operate. The most recent addition, the DTS220, is more powerful and easier to manoeuvre than its predecessors. Every wheel of the DTS220 is driven separately, which means the machine can even turn on its own axis.

Dehaco’s aim is to attract people to its stand, and thus will be exhibiting its most eye catching product, ‘the magnet’, alongside ‘MH125 Pro’ with teeth. The latter is the successor to the MH126. It is a magnet with a powerful 9kW motor and a diameter of 1,250mm. Dehaco hydraulic magnets are made for handling ferrous metals and particularly ferrous scrap (for recycling).

Dehaco will also exhibit a selection of shears at bauma, including an RP20-IT, which is a rotating pulveriser with interchangeable teeth, and an SH250R. This is the smallest scrap shear in the new ‘Eagle III series’. Dehaco looks forward to explaining more about this new series of premium class shears at the bauma fair.