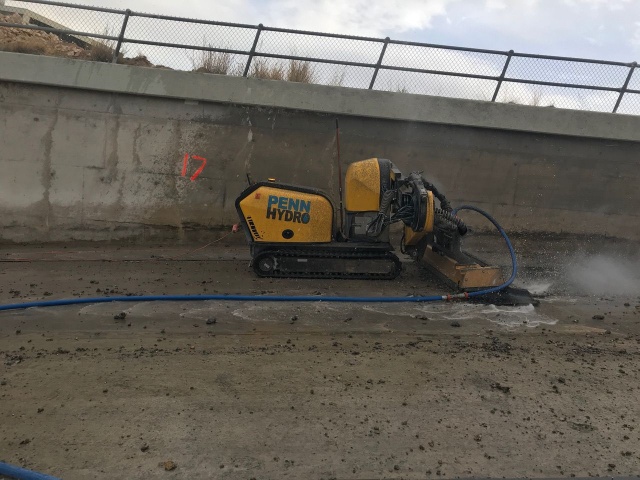 A Conjet robot 557 is being used to remove concrete from the spillway on the Alcova Dam in Wyoming, USA, which is owned by the Bureau of Reclamation. The job is being performed by Penn Hydro, Inc., a hydrodemolition contractor located in Pittsburgh, Pennsylvania, on behalf of the general contractor NW Construction.

Penn Hydro, Inc.’s scope of work on the repair project for the Bureau of Reclamation consists of the removal of deteriorated concrete from the spillway floor and walls of an earth-fill dam that is utilised for water storage and hydroelectric power generation. Penn Hydro is also responsible for the collection, treatment and disposal of the hydrodemolition wastewater. Brad Beaudry, project superintendent for NW Construction, stated that he chose Penn Hydro as the subcontractor because of its prior experience and expertise with complex dam projects. Brad also noted that compared to other concrete removal methods he evaluated when planning this project, hydrodemolition was ‘much faster’ and other removal methods ‘could not touch hydrodemolition in terms of speed.’

Before commencing the project, Penn Hydro carefully examined and serviced a Hammelmann pump and a Conjet Robot 557 prior to the mobilisation from the East Coast of the United States to the Great Plains region. This is roughly a 2,400km trip so it was imperative that Penn Hydro’s operators had functioning equipment as well as additional spare parts and materials to ensure successful execution. Conjet assisted with the preparations by sending its customer success manager, Tim Best, to visit Penn Hydro’s East Coast headquarters prior to mobilisation to ensure that Conjet’s Robot 557 was working properly. Tim also visited the Wyoming jobsite to ensure the robot was running to Conjet and Penn Hydro’s operational standards.

The Bureau of Reclamation performed a second survey just prior to Penn Hydro’s commencement. This second survey uncovered additional areas for repair along the floor of the spillway. The decision of the Bureau of Reclamation was to proceed with hydrodemolition on the newly discovered repair areas. Penn Hydro’s equipment versatility and production rates were considered crucial in the efforts to expedite the schedule given the expanded scope. Mr. Beaudry stated that he has been ‘impressed with the Conjet Robot 557’ based on its production rates, and also because of the 557’s versatility in being able to quickly switch from horizontal to vertical removal using the robot’s standard arm.

The Bureau of Reclamation’s recommendation for commencement of work on the spillway was October, as at this time of year this yields the lowest water levels and safest conditions for all involved. A later start could also prove to be difficult given the cold that Wyoming experiences at that time of year.  Penn Hydro’s initial scope of work is estimated to be in the region of 10 weeks, with anticipated completion set for early December. As additional repair areas were also identified, further time has been allocated accordingly to the project schedule.