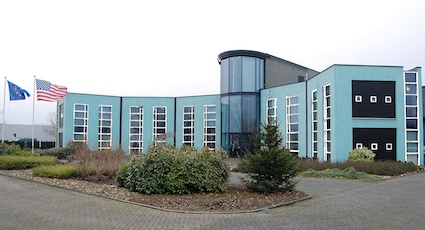 Blastrac now offers over 55 different machines for preparing and maintaining floors and other surfaces of all kinds of materials, including concrete, asphalt, steel and natural stone.

Rocco van Vliet and Clément Charpentier, from Blastrac’s sales and marketing, are both planning for a hectic time at Intermat. Although busy preparing for the show, they both spared the time to discuss Blastrac’s position as a worldwide leading manufacturer of surface preparation machines in general, and the new products to be showcased at Intermat.

“Intermat is an important show for us, and we will show all new products that we have developed over the last couple of months,” says Rocco van Vliet. The biggest Blastrac ‘flagship attraction’ this year is the new BMG-2200, at present the biggest ‘ride-on’ floor grinder in the world for large surface floors.  Other new machines are the new BB-700E burnished, and also five new powerful dust collectors: the BDC-1133, BDC-122, BDC-122H, BDC-133MUD and DC-133HCUD. “However, the new big BMG-2200 floor grinder is our main product launch this year since it is a new innovation where we enter a new market segment for large horizontal surfaces,” says Clément Charpentier.

With two drive wheels fitted to the front, and a swivel castor at the back, the machine is highly manoeuvrable both on and off jobsites. It is both effective and ergonomic to operate, with the operator sitting in comfort on a seat with an armrest on both sides, along with joysticks, push button and a round touch screen. Additionally, the BMG-2200 can be remotely controlled. Its three BMG-780PRO grinding heads produce maximum coverage and effective distribution of grinding pressure on each individual head, meaning each grinding head can be operated individually.

“Further to this, companies that already have BMG-780 machines don’t have to buy the whole new system, including the heads,” says Rocco van Vliet. ”They can use their own heads and put them in the machine.

Also clients that buy the whole new machine, but also work with smaller projects, can take the heads out and put them in a frame on the smaller Blastrac machine, and use it as normal grinder where the BMG-2200 is just too big.”

The new products being launched, along with the growth being experienced in the world-wide construc-tion industry means that Blastrac is growing. “We need more space and are right now expanding our facility here in Nieuwegein, just outside Utrecht, for assembly, availability of spare parts and service on our markets,” says Rocco van Vliet.

Blastrac’s European operation does not only serve the European market, but also Africa, The Middle East, India and South America, thus a huge geographic area.  Meanwhile, the aim for the company is to invest in and operate its own sales and service centres in many markets to facilitate, for example, more efficient logistics, spare part supply and service training. “Even though it is a major investment, it is a huge advantage to operate with our own sales and service centres in local markets to better serve our clients. The people there are trained exclusively for our and our clients’ specific needs,” emphasises Rocco van Vliet.

In the 1980’s Blastrac started its own production of surface preparation and maintenance equipment in Europe and this had led to other facilities. “In 2006 we opened a production plant in Poland that has some 125 people today, and does all our steel work for the machines. All the final assembly and testing is done at the Dutch plant in Nieuwegein. This enables us to keep supplying the very best high quality equipment for the surface preparation industry,” Rocco van Vliet says. To further streamline production and quality control, the company recently acquired ART4 Technical Systems BV in the Netherlands, which has been the supplier of quality electrical and hydraulic parts for the past 18 years.

Being the developer and manufacturer of more than 55 machines for surface preparation, Rocco van Vliet believes it is important to emphasise that while most competitors in the market are specialised in limited product ranges, Blastrac has a wide range of many different machines and surface preparation technologies. These are able to combine and perform surfacing jobs in the most efficient and cost effective way. “If you want to see that for yourself, come and visit us at Intermat this year at our stands E6 B88 and E6 B21. We will show you what Blastrac can offer,” ends Clément Charpentier.