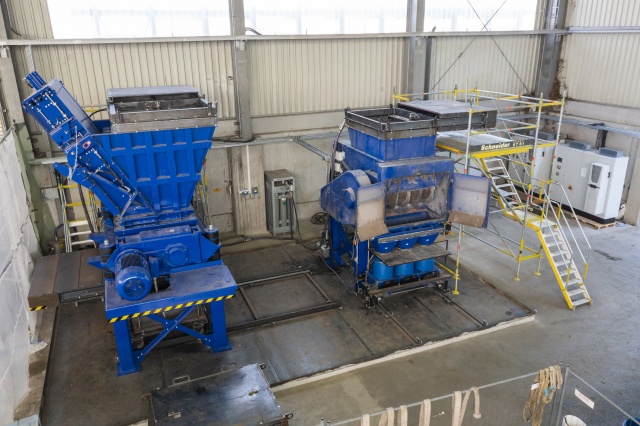 In the future, BHS-Sonthofen will be able to conduct tests on the recycling of batteries in its test centre. BHS is using the test runs to adapt its recycling process for lithium-ion batteries to customers’ individual requirements. Thanks to a sophisticated safety system, the approved monitoring body (Zugelassene Überwachungsstelle) granted permission for the tests to be performed.

Performing tests with different feed materials are critical for BHS-Sonthofen when it comes to recycling lithium-ion batteries. The results can be used to calculate the economic efficiency of the process and optimally adapt the individual machine components to individual customer requirements. However, recycling lithium-ion batteries is a tricky business. Even with fully discharged batteries, there is always a certain degree of residual risk of a short circuit inside the battery cell during the shredding process, causing a fire that is difficult to extinguish. In addition, highly toxic substances such as extremely corrosive hydrofluoric acid are produced during the process.

To guarantee the safety of the test facility and protect employees, BHS-Sonthofen developed a sophisticated safety concept in cooperation with TÜV Süd and the approved monitoring body. First, BHS checks that the batteries designated for shredding are actually deep discharged in full. They are only fed into the shredding process if the residual voltage is correct and the batteries pass a visual inspection when they arrive at BHS. A rotary shear (type ‘VR’) is used for pre-shredding and a universal shredder (type ‘NGU’) is used for the main shredding of the material. This is required so that the material is preconditioned for the downstream processing steps such as drying, classifying and sorting. Both shredders have a gas tight design and are flooded with nitrogen, with pressure sensors and flow meters monitoring the inflow of nitrogen.

Additional sensors inside the two machines also check the residual oxygen content. This minimises the potential risk of fire. Temperature and other pressure sensors in the shredders monitor the process itself. In the event of a sudden increase in pressure, the control system reacts and automatically stops the shredding process. If a fire should occur despite the intervention of the control system, for example due to short circuits or polarity in the battery cells reversing spontaneously, the machines can be completely flooded with water. Both machines are located in a tank to ensure that contaminated water does not enter the environment in this scenario. This would then collect extinguishing water and escaping material.

BHS has also taken precautions for storing and transporting shredded battery material to ensure that employees come into as little contact with the material as possible. For example, the shredded batteries fall into UN certified drums that are hydraulically coupled to the machine during the test. The machines also have a hydraulic slide system to prevent the environment from being contaminated. All employees wear the appropriate personal protective equipment (PPE). The site fire department is also present during each test.

Getting official approval for the test centre to conduct shredding tests with lithium-ion batteries was not a simple process explains Steffen Hinderer, director process development at BHS: “At the beginning, it was far from clear as to what hazardous substances were produced and what the composition of the waste gases produced during the process was. To find out how often it would be necessary to change the filter in the exhaust gas purification system, for example, we also had to obtain prior approval for the initial tests of course, we already paid meticulous attention to the safety of people and the environment and coordinated each individual test with the authorities.” BHS worked closely with TÜV Süd and the approved monitoring body during the entire process overall. Once a year, the approved monitoring body carries out the inspection and checks any adjustments to the process, for example, if BHS also wants to carry out tests with solid batteries in the future.