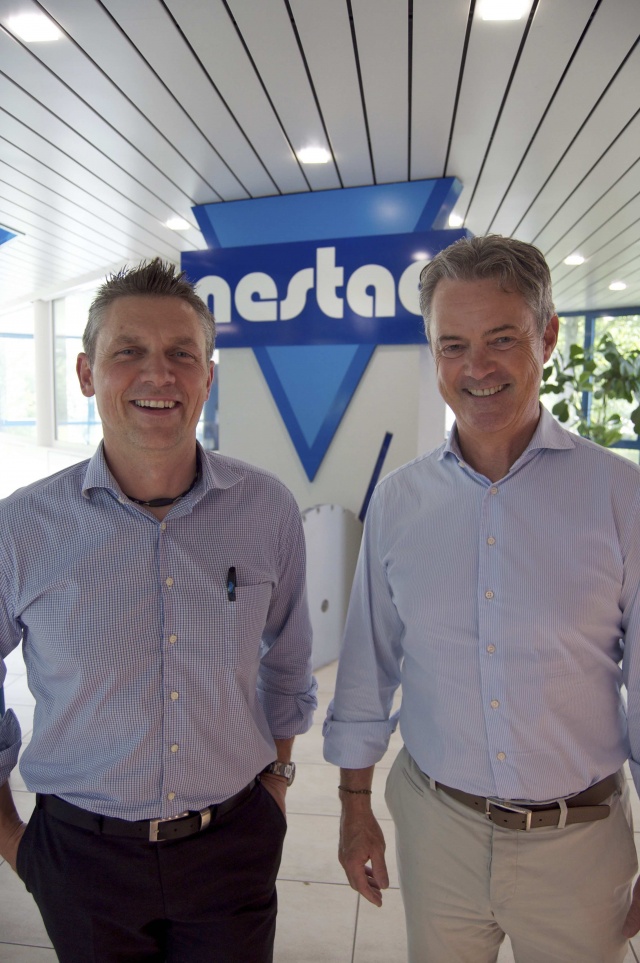 It’s not only manufacturers that play an important role in an industry’s development. Strong distributors also have a major impact in a region or a whole country. There are many examples and one is the company Nestag in Eptingen, Switzerland, which now is part of the Tyrolit Group. Jan Hermansson reports.

The company’s managing director Donat Fritsch will be replaced by Reto Scussel on 1 January 2016 and the two symbolise a shift of paradigms in Nestag. The company has been owned since 2014 by the Austrian manufacturer Tyrolit and Fritsch will remain as president of the company over a transition period.

Nestag was founded by René Lukas Fristch. Together with his wife Maja the company was brought up from a small family business to the current multi million Swiss Franc enterprises with 40 employees. The family business atmosphere will continue with new owners.

Originally there was a company Scheiftechnik, which means grinding technology. Business was operated from the company between 1964 to around 1980 when it was switched to a new company called Nebenschleiftechnik, which translates to next to grinding technology. The first letter of each syllable was then used to form the abbreviation Nestag. René and Maja had four children and all were working in the family business at some point.

Donat Fritsch, who was their only son, took over as managing director from 1985. In the company’s first decade, when business was carried out in the family‘s garage, Bakelite was the dominant material in the tools. But in the late 1960s and early 1970s diamond tools became more and more common and Nestag took on this new material. “I remember in the early days that my father set a goal that when we reached the turn over of CHF20,000 (€18,000) we would have a family celebration and fly over the surroundings. We reached the goal and we got our flight,” said Fritsch, who did not intend on taking over the family business. He had his own career before he decided to work for his parents’ company, a decision he has not regretted.

When Fritsch came into the business he introduced a number of early changes. A plot was purchased in Eptingen and in 1989 the new Nestag premises was opened in the industrial area of Matten next to the village centre.

Fritsch said that Nestag always operated as a dealer and distributer for different brands and never intended to produce their own tools or machines. “Our focus has always been of finding the best tools and machines for our clients to stay optimal and in the front edge of their business. That is what has been and still is driving us,” said Fritsch.

Nestag currently has 40 employees and is operating in 2500m2 facilities in Eptingen as well as in Givisiez and Pfäffikon. The premises in Eptingen include sales and administration, storage, workshop for service and repair of machines and retippning of diamond tools, training area and an outdoor demonstration area. The company has a strong position in the Swiss market and is one of the three largest distributors in its field in the country. Since Tyrolit acquired the company the product range has been updated with the complete range of Tyrolit diamond tools and Tyrolit Hydrostress concrete cutting machinery.

Switzerland remains on its peak

Fritsch said that the Swiss market is still on a very high level and business is very good, as long it is not a question of export as the Swiss Franc is also very strong making Swiss products expensive outside the country. “2008 was a very good year almost all over Europe I believe. But when most European markets experienced a fast recession over the following year the Swiss market continued to increase. In 2015, we are maybe not increasing anymore, but we are certainly still on a very high level and business is good. I think it will remain like this at least for another couple of years,” said Fritsch.

Nestag is a well-known supplier in Switzerland but abroad it is probably the former owner and president of the company Donat Fritsch that is better well known. For many years Donat Fritsch held a central position in the Swiss concrete cutting industry. He was one of the founders of the Swiss concrete sawing and drilling association and remained part of the board for many years. He was also one of the founding members of the International Association of Concrete Drilling and Sawing Contractors. After the first president of IACDS, Otto Alte-Teigeler, Fritsch was the chairman for six years.

But from 1 January 2016 Fritsch is stepping down from his position as president of Nestag and will be replaced by Reto Scussel. However, Fritsch will remain as chairman of the board. Scussel left his previous employment with Demco, Swiss maker of concrete sawing and drilling machinery, in May and started working in parallel with Fritsch in June this year.

“I think we have an excellent cooperation and this, a little more then half a year, will be a good start for Reto to get to know the company and its clients,” said Fritsch. “Reto was immediately very well accepted among the staff members at Nestag and everything is proceeding very smoothly.”

“I am very excited about my new position with Nestag and I feel that my years with Demco has given me a good knowledge about the Swiss concrete cutting industry, which will be useful for me at Nestag. To have Donat next to me now is very valuable and later on as chairman he will be a good support,” said Scussel.

Nestag has been a considered purchase for Tyrolit for quite a while. Nestag has an overall market share of 25% in diamond tools and concrete cutting machinery in Switzerland. For just wall and wire saw equipment the market share is higher and maybe 30% to 35%. For floor grinding tools and equipment Nestag is believed to have about 80% of the market in Switzerland. Nestag also has a strong foothold in the general construction sector, which is an advantage for Tyrolit and a sector that they want to build their presence.

Another clear advantage with Nestag is the fact that no changes are required in the structure of the company. It has a good reputation and is well known, has a strong product range, good and loyal staff and it is profitable. An area where there is potential to expand the product range is maybe sales of metal cutting tools, which is a sector where Tyrolit has a strong foothold.

Fritsch is confident about the future of Nestag. He knows he is handing over a very well shaped company and the strongest asset of Nestag is its staff. “For me the most important thing during my last 10 years in the company has been finding the right people. I think the right products and the right people is the perfect mix and that should represent the majority of a company. The people working in the company are the key to everything and the core in a successful business is all about emotions. The right employees create a good relationship and positive emotions between the company and its clients. The right people make sure that the whole sales process works smoothly and that the products reach the clients in time. If there is a problem, and that always happens now and then, the right people handle these things in the best possible way. And all these things are about relationship and emotions.” said Fritsch.